The Christians of Iraq form one of the oldest Christian communities of the Middle East. The vast majority are Aramaic speaking ethnic Assyrians with much smaller numbers of Armenians, Arabs, Turcoman and Kurds. In Iraq, Christians numbered about 636,000 to 800,000 in 2005, representing just over 3% of the population of the country. They numbered over 1 million in 1980 or 7% of the population. 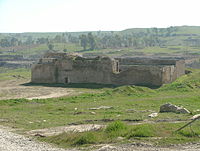 The majority of the Iraqi Christians belong to the Eastern Rite churches.

The Churches of the Armenian rite

The other churches and communities 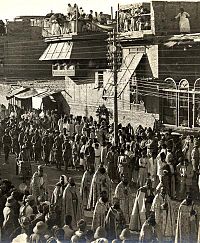 Celebration of Corpus Christi in Iraq, 1920, attended by Chaldeans, Syriacs, and Armenians.

Christianty was brought to Iraq in the first century by the Apostle Thomas, Addai (Thaddaeus) and his pupils Aggagi and Mari. Thomas and Thaddeus belonged to the twelve Apostles.[1] Iraq's Assyrian Christian communities are among the oldest in the world. The indigenous Assyrians adopted Christianity in the first century AD.[2] and Assyria became the centre of Eastern Rite Christianity from the 1st century AD until the middle ages. In the early centuries after the Islamic conquest, Christian scholars and doctors played an influential role in Iraq, however, from the late 13th century until the early 16th century, Christians suffered persecution and some massacres.[3] In 1932, the Iraqi military carried out large-scale massacres against the Assyrians (Simele massacre).[2]

Some of the Armenian Christians are descendants of refugees fleeing massacres in the early 1900s in Turkey.[2]

Prior to the Gulf War in 1991, Christians numbered one million in Iraq.[2] The Baathist rule under Saddam Hussein kept a lid on anti-Christian violence but subjected some to "relocation programmes".[2] Under this regime, the predominantly Assyrian Christians were pressured to identify as Arabs. The Christian population fell to an estimated 800,000 before the 2003 invasion of Iraq.[2] 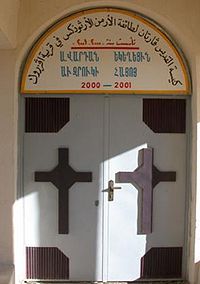 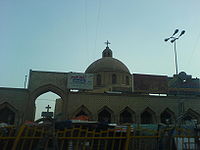 A church in Baghdad.

After the 2003 invasion of Iraq, violence against Christians rose, with reports of abduction, torture, bombings, and killings.[4] Some Christians were pressured to convert to Islam under threat of death or expulsion, and women were ordered to wear Islamic dress.[4]

In August 2004, International Christian Concern protested an attack by Islamists on Iraqi Christian churches that killed 11 people.[5] See 2004 Iraq churches attacks. In 2006, an Orthodox Christian priest, Boulos Iskander, was beheaded and mutilated despite payment of a ransom, and in 2008, Archbishop Paulos Faraj Rahho of Mosul died after being abducted.[4] In January 2008, bombs exploded outside nine churches.[4]

Christians live primarily in Baghdad, Basra, Kirkuk, Arbil and Mosul and in Assyrian towns in the north.[2]

In 2010, reports emerged in Mosul of people being stopped in the streets, asked for their identity cards, and shot if they had a name indicating Assyrian or Christian origin.[3] On 31 October 2010, 58 people, including 41 hostages and priests, were killed after an attack on a Catholic church in Baghdad.[6] See October 2010 Baghdad church attack. A group affiliated to Al-Qaeda, Islamic State for Iraq, stated that Christians were a "legitimate target."[7] In November, a series of bombings and mortar attacks targeted Christian-majority areas of Baghdad.[7]

Half the Christian population has fled, with an estimated 330,000 to Syria and smaller numbers to Jordan.[4] Some fled to Iraqi Kurdistan in northern Iraq.[8][4] Christians who are too poor or unwilling to leave their homeland have fled mainly to Arbil, particularly its Christian suburb of Ainkawa.[3] 10,000 Iraqi Christians live in the U.K. led by Archbishop Athanasios Dawood who has called on the government to accept more refugees.[9]

Apart from emigration, the Iraqi Christians are also declining due to lower rates of birth and higher death rates than their Muslim compatriots. Also since the invasion of Iraq, Christians have been targeted by extreme Islamic organisations.[10]

Former Iraqi Foreign Minister Tariq Aziz's death sentence was not signed by the Iraqi president in 2010 because the president "sympathise[d] with Tariq Aziz because he is an Iraqi Christian."[11] This also came after appeals from the Holy See not to carry out the sentence.[12]