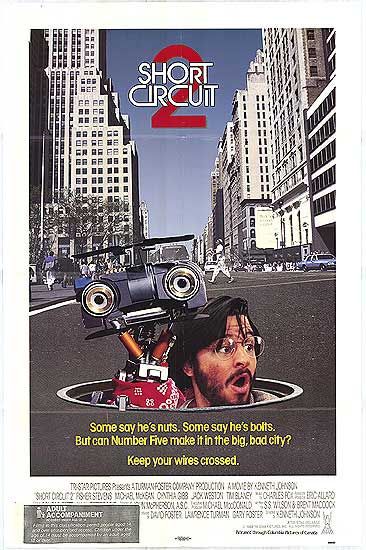 "Short Circuit 2" is a 1988 , sequel to "" directed by . It starred as Ben Jahveri (his last name is a running gag on the film, mistaken as Jahrvi or something else); as Fred Ritter; as Sandy Banatoni; and (the main character - a very friendly, self-aware ), voiced by .

Set an undisclosed amount of time after the first film, Benjamin Jahveri () has moved to where he is selling toy versions of Johnny 5 out on the street. Struggling department store buyer Sandy Banatoni () sees the toys and works out an order for 1000 units. Ben gains the help of street hustler Fred Ritter () for the project, and Fred borrows money from a to get equipment, temps and a warehouse to build the toys.

Unfortunately, the warehouse is the base of operations for a duo of thieves hired by Oscar Baldwin () to tunnel underground to his bank's safe across the street where they hope to steal a $37,862,000-worth set of jewels known as the Vanderveer Collection. The thieves attempt to scare Ben and Fred off, trashing their equipment and causing their temps to flee, making it impossible to meet their deadline.

A large crate arrives from Ben's friends Stephanie and Newton, and it contains Johnny 5, who has been sent to help Ben with his business. Johnny can build the toys in rapid time, allowing Ben free time to study up for what he would need to become a . Keeping in mind Johnny's thirst for knowledge, Ben makes Fred swear not to reveal the nature of their location to Johnny, believing (rightfully) that the robot would go nuts if he knew he was living in a major metropolis filled with .

When Fred accidentally lets it slip to Johnny that he is in the city, the robot leaves the warehouse to explore New York, and inadvertently makes friends with Oscar himself.

Fred, knowing from Ben that Johnny is worth over $11 million, tries to sell the robot to a few high-profile businessmen. When Johnny learns Fred plans to sell him, he escapes and wanders alone through the city. Johnny soon realizes through his interaction with passers-by just how lonely he is, because of his inability to convince anyone that he is alive. Johnny is later found and retrieved by Ben from the NYPD's stolen goods warehouse. The two have a heart-to-heart, and Johnny encourages Ben to ask Sandy out on a proper date. After an awkward start, Ben and Sandy find a connection.

The thieves, pressed for time to steal the jewels, lock Ben and Fred in the freezer of a Chinese restaurant, while Oscar persuades the overly trusting Johnny to help finish the tunnel leading to the bank. Johnny completes the tunnel, breaks into the safe, and unlocks the that holds the Vanderveer Collection. Johnny finally becomes aware of Oscar's true intentions, but after a brief chase through part of the city, Oscar and his goons severely damage him.

Although Johnny manages to get away from the thieves, he is slowly dying. Ben and Fred also manage to escape the freezer thanks to Sandy, but when they return to the warehouse, Ben and Sandy are falsely captured by the police for the robbery, while Fred escapes and manages to find Johnny in an alleyway. Fred is startled by how smashed up Johnny is, and helps patch him up enough to reconnect his main battery and memory, which is enough for Johnny to make the remaining repairs himself.

Despite his injuries, Johnny is determined to bring Oscar and his cronies to justice. After a brief chase, he finds and corners them at a construction zone near the . Oscar and his gang are captured and the diamonds are returned, but the effort drains Johnny's remaining power reserves, causing Ben to frantically use a in an effort to save Johnny. Ben succeeds, and manages to keep him alive long enough to make full repairs on him.

The final scenes show that Johnny has become an overnight celebrity, his face and tale with the jewel thieves adorning the front page of newspapers and magazines everywhere. As a result of this newfound fame, his look-alike toys have become a hot commodity, allowing Sandy, Ben, and Fred to go into business for themselves as a successful corporation known as Input, Inc. The film concludes with Ben's inauguration into U.S. citizenship, which he shares with a newly-restoredndashand solid goldndashJohnny, officially recognized as a living, thinking, citizen with all the associated rights and privileges. Asked how he felt about his new status, Johnny enthusiastically jumps into the air, shouting that he feels "alive!"