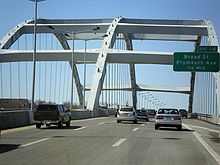 The Douglass-Anthony Bridge as seen from I-490 westbound

The New York State Department of Transportation is responsible for maintenance on the bridge.

Construction on the new bridge, then known as the "Troup–Howell Bridge", began in April 2004.[3] To prevent the flow of traffic from being halted on I-490, the construction of the arch bridge and the demolition of the girder bridge were done in stages, which allowed a minimum of four lanes of traffic, two in each direction, to be open at all times.[4] On June 18, 2007, the bridge was officially completed and fully open to traffic for the first time.[3]