Operation Marne Torch refers to two operations launched by Coalition forces in 2007 against al-Qaeda in Iraq in the Arab Jabour area of Babil province. This campaign is named after Operation Torch, the joint US/British invasion of French North Africa in 1942,[3] presumably because of the two operations' similar thrust in to the enemies southern underbelly.

The first operation, Marne Torch I began on June 16, 2007, when Multi-National Division-Central launched offensive operations against Sunni and Shi'ia extremists, as well as insurgents with Iranian influence in the city and surrounding regions of Arab Jabour in Babil province.[4] The action was intended to clear terrorist sanctuaries southeast of Baghdad as well as reduce the flow of accelerants into that city by both combat and civil-military operations.[4] 2000 coalition and 1000 Iraqi army soldiers disrupted insurgent operations by capturing, seizing, and clearing caches that support instability in the area.[5]

Marne Torch II was launched on September 15, 2007 in the Hawr Rajab area. Supported by a newly created Sons Of Iraq group from Arab Jabour, Coalition forces continued their push along the west bank of the Tigris river, killing or capturing 250 insurgents, destroying 12 boats being used by the insurgents to funnel weapons into Baghdad, and uncovering 40 weapons caches, often with tips from the Sons of Iraq.[1]

The 2nd BCT of the 3rd infantry division was the 20th and last of the "Surge" brigades to arrive in Iraq. Their mission was to clear and hold the Arab Jabour area to the south-east of Baghdad, through which insurgents had been supplying forces in Baghdad. Coalition forces adopted a new counter insurgency strategy of moving out of forward operating bases and living with the population, to provide security and gain more useful intelligence.

US forces reported to be involved were 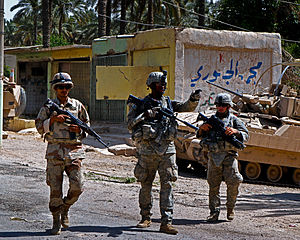 As part of the much vaunted "troop surge" in the summer of 2007, MND-C initiated Operation Marne Torch I on June 15, 2007. Consisting of both kinetic and non-kinetic operations, Marne Torch I was launched to establish a security presence on both sides of the Tigris River valley, an area that had not seen a large coalition presence and was under insurgent control. According to MND-C Commander Maj. Gen. Rick Lynch the operation sought specifically to "block accelerants of violence into Baghdad, secure the population and defeat sectarian violence." Lynch said "Accelerants are defined as anything -- insurgents, weapons, materiel, IEDs, VBIEDs, ideology, anything -- that, left uncontrolled, would affect the security in Baghdad."[6] While being intelligence-driven, Marne Torch had three primary characteristics:

During this phase, more than 1,100 structures were cleared, 83 insurgents killed, and more than 850 citizens were entered into a biometric identification system. However, Coalition forces failed to transition to a holding strategy as the insurgent network proved too entrenched and Iraqi security forces too immature.[7]

American air power was used extensively during Marne Torch I. During the operation more than 70 air strikes were conducted, including attacks by US Air Force B-1B bomber [8] and F-16C strike aircraft,[9] as well as US Navy F/A-18E Hornets. The new XM982 Excalibur satellite-guided artillery round was also utilized with particularly devastating effect, targeting insurgent leaders hiding among the local populace.[4] One example of this particular weapon system being effectively employed, in conjunction with fluid coordination between other American air support assets, occurred on July 14.[10]

Coalition forces received intelligence reports that Al-Qaeda in Iraq cell leader Abu Jurah and 14 insurgents were meeting at a house in Arab Jabour. The cell was reported to be responsible for IED, VBIED, and indirect fire attacks on Coalition forces. Predicated upon this belief, American commanders went after Jurah with a vengeance. At 1312 zulu time, the meeting house was positively identified. Two XM982 Excalibur rounds were fired from a M109 Paladin 155mm battery based at Camp Falcon and placed on the house, destroying it.[11] A Predator UAV orbiting overhead observed personnel leaving the rubble of the meeting house, loading wounded persons in to a sedan and driving away. An AH-64 Apache helicopter gunship arrived over the area and promptly destroyed the sedan. Three more personnel were observed running from the remnants of the meeting house into a nearby structure.

Soldiers on the ground also had the advantage of ubiquitous OH-58D Kiowas patrolling the sky, providing near-instantaneous visual reconnaissance and fire support. The 3rd Combat Aviation Brigade which operated the Kiowas was responsible for over 70% of insurgent casualties[1]

On July 2 an insurgent leader on the most wanted list was captured in Arab Jabour.

was launched on September 15, 2007 in the Hawr Rajab area. Supported by 700 Iraqis from the newly created Sons Of Iraq group from Arab Jabour, Coalition forces continued their push along the west bank of the Tigris river, killing or capturing 250 insurgents, destroying 12 boats being used by the insurgents to funnel weapons into Baghdad and uncovering 40 weapons caches, often with tips from the Sons of Iraq.[1]

Coalition forces also established new patrol bases in Arab Jabour, which allowed them to push further south into insurgent sanctuaries in future operations as well as allow Iraqis to feel secure enough to come forward and volunteer for the awakening movements.[1]