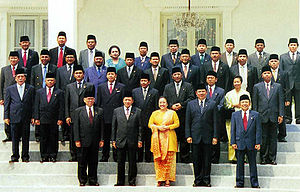 Members of the Mutual Assistance Cabinet in 2001

The Mutual Assistance Cabinet (Indonesian: Kabinet Gotong Royong) was the Indonesian Cabinet which served under President Megawati Sukarnoputri and Vice President Hamzah Haz from 9 August 2001 until 20 October 2004. The Cabinet was formed after Megawati and Hamzah were elected President and Vice President at the Special Session of the People's Consultative Assembly in July 2001.