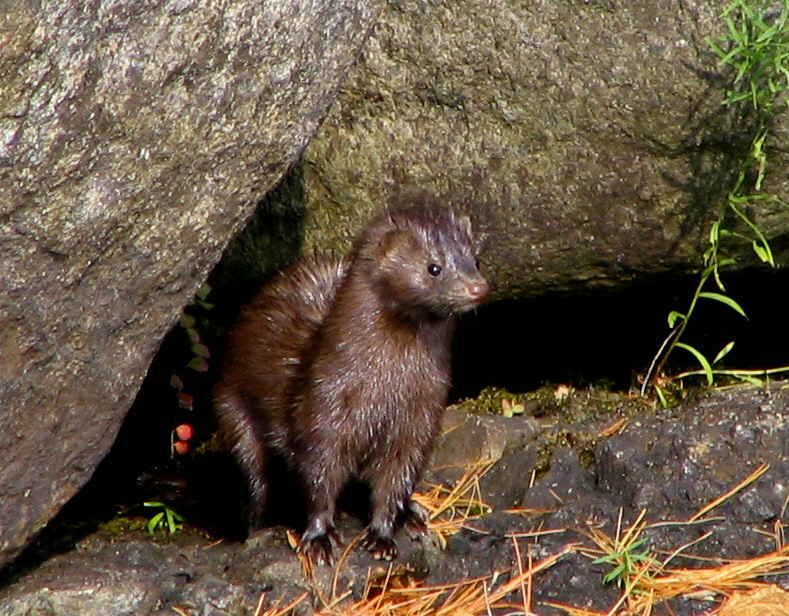 phylum =
regnum = ia
classis = ia
ordo =
familia =
genus = ""
species = "N. vison"
binomial = "Neovison vison":"The American Mink" is a trademark of the "The American Mink, "Neovison vison", is a n member of the family found in , and most of the . They are related to , , , , and fishers. They were once grouped with although new genetic evidence suggests skunks should be classified in a separate family . A domestic form of American Mink has also been raised in s for their lustrous , which is highly esteemed. Breeders have developed a range of colors from deep black to white. A related marine species, "Neovison macrodon", was hunted to extinction in the 19th century.

Their long slim body is covered in glossy, thick dark brown fur with a white patch under the chin. They have short legs with partially webbed feet, which make them excellent swimmers.They can be found in wooded areas and fields near streams and lakes. They do not dig burrows, but instead take over dens abandoned by other animals.

Mink are semi aquatic predators able to hunt both aquatic and terrestrial prey. They can dive under water like an otter to capture fish, crayfish, and frogs. They can also capture terrestrial prey like birds, snakes, mice, voles, and rabbits. Mink are generalist predators focusing on what ever prey is most available and easily captured. These animals are mainly active at night and do not hibernate. Their predators include s, , and wolves. They are also trapped for their fur. Their numbers have been reduced due to loss of habitat, the effects of pollution on their aquatic food supply, and the mixing of domestic mink genes into the wild mink gene pool. [Bowman, J., Kidd, A., Gorman, R., Schulte-Hostedde, A. 2007. "Assessing the potential for impacts by feral mink on wild mink in Canada," Biological Conservation 139: 12-18.]

They are usually solitary animals. Mating occurs from early February through early April; males and females may have more than one partner. Females give birth to 4–5 kits per litter once a year. While mortality is extremely high in the early months of the life of the American Mink, animals that do survive the first year can live as long as three years in the wild.Fact|date=May 2008 In captivity, mink can live 10–12 years.Fact|date=May 2008 The mink is found in places which suit its habits throughout almost all , from to the . An endangered , the Everglades Mink ("Mustela vison evergladensis"), is endemic to the .

A 2006 study in Denmark concluded that, due to frequent escapes from existing mink farms, “Closing mink farms may result in a crash of the free-ranging population, or alternatively it may result in the establishment of a better-adapted, truly feral population that may ultimately outnumber the population that was present before farm closures.” The study reported that more information would be necessary to determine the outcome. [ [http://www.ingentaconnect.com/content/mksg/eco/2006/00000029/00000004/art00001;jsessionid=3583b14k82sto.alice?format=print Incorporating evolutionary processes into a spatially-explicit model: exploring the consequences of mink-farm closures in Denmark by Hammershøj, Mette; Travis, Justin M. J.; Stephenson, Catriona M.] ] Another Danish study reported that a significant majority of the “wild” mink were mink which had escaped from fur farms. 47% had escaped within two months, 31% had escaped prior to 2 months, and 21% “may or may not have been born in nature.” [ [http://www2.dmu.dk/1_viden/2_Publikationer/3_Ovrige/rapporter/Phd_MHA.pdf Danish free-ranging mink populations consist mainly of farm animals: evidence from microsatellite and stable isotope analyses by Mette Hammershøj1, Cino Pertoldi, Tommy Asferg, Thomas Bach Møller & Niels Bastian Kristensen] ]

In recent years, animal rights activists have also released several thousand domestic mink causing negative environmental consequences. Domestic mink, which are bred in fur farms, are different from wild mink. Domestic mink are found to have 19.6% smaller brains, 8.1% smaller hearts, and 28.2% smaller spleens than wild mink do. [Kruska, D. and Schreiber, A. 1999. "Compatative morphpmetrical and biochemical-geneic investigations in wild and ranch mink," Acta Theriologica 44, 4: 382. .] [Kruska, D. 1996 "The effect of domestication on brain size and composition on the mink," J.Zoo.,Lond 239: 655.] Because of these physical differences, domestic mink may not be suited for life in the wild. A University of Copenhagen study found that most domestic mink that escape from fur farms die in less than two months. [Hammershøj, M. 2004. "Population ecology of free-ranging American mink Mustela vison in Denmark," Thesis. University of Copenhagen.]

This data is contested by M. Hammershøj and M.C. Forchhammer, who studied the survival rate of escaped mink in Denmark, then compared that data to similar studies in the US and Sweden. The authors concluded that the survival rate for recently released mink is lower than for wild mink, but if mink survive at least two months, their survival rate is the same as for wild mink. The authors suggest that this is due to the rapid behavioural adaptation of the animals. [ [http://www2.dmu.dk/1_viden/2_Publikationer/3_Ovrige/rapporter/Phd_MHA.pdf Survival rates of free-ranging farm mink suggest quick behavioural adaptation to natural conditions] ] A biologist with the Washington State Department of Fish and Wildlife commenting on a mink farm release concurs, stating that "These things will survive and reproduce as long as they have something to survive on." [ [http://community.seattletimes.nwsource.com/archive/?date=20030829&slug=mink29m0 Freed mink attack Sultan farms] ]

Some American Mink have established themselves in the wild in Newfoundland, and due to escapes or intentional release by animal rights activists from s. In parts of Europe, tens of thousand were intentionally introduced by the over a period of several decades, to provide a new game animal for trappers, with disastrous population declines of the as result.Fact|date=May 2008

The larger American male will mate with European Mink females earlier in the spring than the males of the same species; no offspring are born, but the females do not then breed again that season.Fact|date=May 2008 This is believed by some, to have contributed to the decline of the European Mink. American Mink have also been implicated in the decline of the in the and linked to the decline of water fowl across their range in Europe. They are now considered vermin in much of Europe and are hunted for the purpose of .Fact|date=May 2008

Like their cousins, the , mink are very playful. They are very inquisitive, highly intelligent animals. A study was performed that compared the learning ability of mink to s, skunks, and house cats. [Barbara A. Doty, C. Neal Jones and Larry A. Doty "Learning-Set Formation by Mink, Ferrets, Skunks,and Cats".] The animals were tested on their ability to remember different shapes. The order of ability of remembering these different shapes were from best to worst; mink, ferrets, skunks and cats. Mink were in fact found to be more intelligent than certain groups of primates. After considerable training, mink were also found to learn after only one trial. This is a phenomenon usually only observed in higher primates.

Despite the fact that they are inquisitive, playful and cute, mink do not make good pets for the average person because they have strong jaws, very sharp teeth, can be highly aggressive, and are very active. Most people do not have the knowledge, or the patience to properly care for a pet mink.

Even though domestic mink have been bred in captivity for around a hundred years, they have not been bred to be tame. Domestic mink have been bred for size, fur quality, and color. However, the Fur Commission of the US claims that "mink are truly domesticated animals" based on the number of years they have been kept on fur farms. [ [http://www.furcommission.com/resource/Resources/MFIUS.pdf Mink Farming in the United States] ]

The belief that mink are completely untameable is not true ether. Mink can be tamed and kept as pets, but it is a difficult process. Individuals with lots of time, patience, and experience with wild animals, have successfully kept mink as pets.Fact|date=May 2008

Transmissible mink encephalopathy (TME) is a disease of mink, similar to in and in . A 1985 outbreak of TME in Stetsonville, Wisconsin resulted in a 60% mortality rate for the mink. [ [http://www.grow.uwcalscommunication.com/2007/09/18/hello-world/ Unfolding the Prion Mystery] ] Further testing revealed that this agent is transmissible between mink, cattle and sheep. The Stetsonville outbreak may have been due to the animals being fed the carcasses of other infected animals. [ [http://www.mad-cow.org/Marsh_collected.html Scientific papers on Spongiform Disease by R.F. Marsh] ]

A mink which has escaped from a farm in England is the protagonist of Ewan Clarkson's novel "Syla", whereas several mink in the same setting play the villainous invaders in A.R. Lloyd's "Kine", where the hero is a weasel. The former is a naturalistic third-person narrative; the latter has some elements in that it features .