Jersey Live is an indie/dance music festival held annually at The Royal Jersey Showground in the parish of Trinity, Jersey. The festival has grown in popularity and size each year and has drawn interest from people outside the Channel Islands with overseas visitors making up approximately 25% of the crowd. 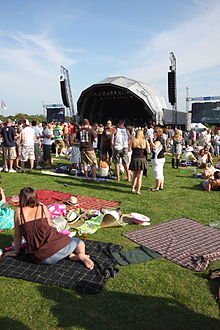 The Jersey Live Festival has been organised by Warren Le Sueur and Warren Holt[1] since 2004. In 2006, there was a huge demand for tickets and subsequently, Positiv applied for licensing permission for an extra day for the festival. In 2010, the event sold out for the first time since being granted a 10,000 visitor capacity.

The festival was once again sponsored by Jersey Telecom, and was held on 3 and 4 September 2011.

Jersey Telecom renewed their sponsorship agreement of Jersey Live for a fifth year.[2]