The Feast of the Gods (Bellini)

The Feast of the Gods (Bellini) 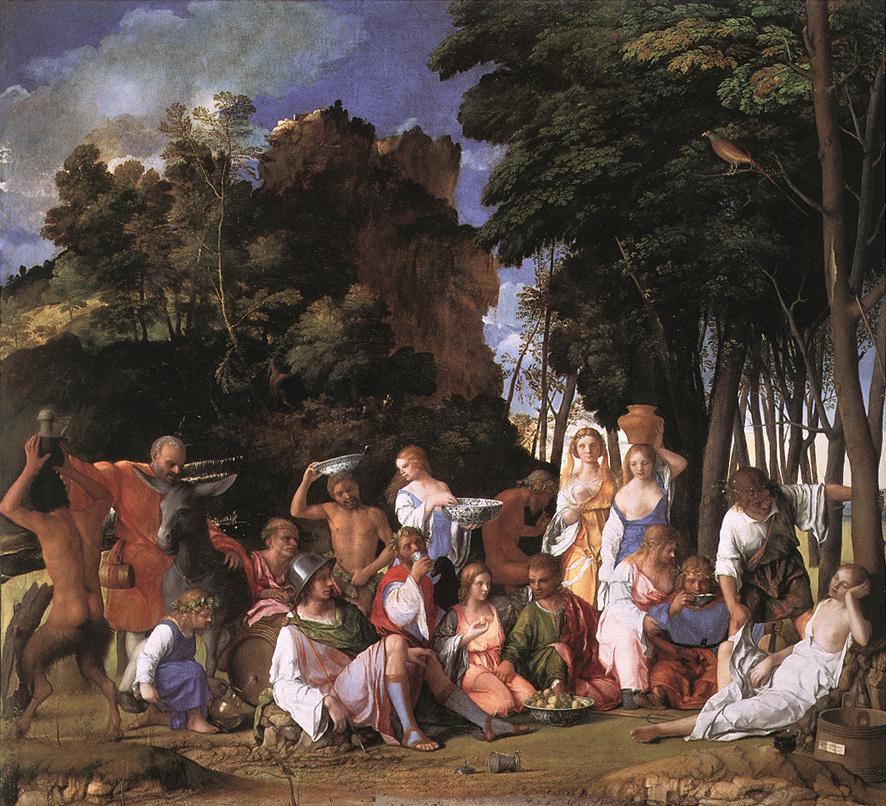 title=The Feast of the Gods
artist=Giovanni Bellini and Titian
year=
type=Oil on canvas
height=170
width=188
museum=National Gallery of Art
city=WashingtonThe "Feast of the Gods" () is an by the Italian Renaissance master . It is one of a cycle of paintings on mythological subjects produced for , the Duke of , for his "camerino d'alabastro" ('chamber of alabaster') in the , . It is one of the few mythological pictures of the Venetian artist, who repeatedly modified it. At his death soon afterwards (1516), modified the landscape on the left to match it to his "Bacchanalia" (1518–1523), also in Alfonso's camerino.

The scene depicted conflates two episodes in 's "Fasti". , on the left, is attempting to seduce the sleeping , but is prevented from success by the bray of ' donkey. Around are the drunken Gods: Jupiter has an eagle next to him, is caressing and Ceres, while is languidly lying on a barrel. The boy with vine-leaves on his head is an unusually young depiction of Bacchus. It is thought that Bellini initially painted the figures as mortals, following a misleading translation of Ovid (the so-called "Orgasma volgarizzato"), and had to re-paint them with the attributes of the Olympian gods. [Jaffé, David and Sorcha Carey, "Giovanni Bellini (about 1430–1516), with additions by Titian: "The Feast of the Gods". "Titian". Ed. David Jaffé. London: National Gallery Company, 2003, p. 108]

The painting was bought from the by the American magnate Peter A. B. Widener in 1925, and later entered the in with the rest of his collection. [Conisbee, Philip, "The Ones That Got Away". "Saved! 100 Years of the National Art Collection Fund" Ed. Richard Verdi. London: Scala, 2003, p. 30]