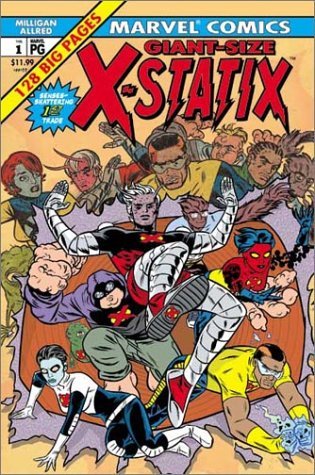 X-Statix was the name of a al team of mutant es in , specifically designed to be media superstars. The team, created by and , first appears in "" #116 and originally assumed the moniker X-Force, taking over for the more traditional superhero team after most of them are seemingly killed in an explosion.

In 2001, the family of titles were being revamped by the newly appointed editor-in-chief , with the aim to make the titles more critically and commercially successful. Former Vertigo editor hired writer , best known for his surreal, post-modernist comics such as "Rogan Gosh" and "", and "" artist , as the new creative team for "", starting with issue #116. "" prior to Millgan and Allred's first issue sold well but rarely had been the critical success Quesada wanted.

From their first issue of "X-Force" things were changed right away; gone was the previous team and replacing them were characters more like popstars or reality TV contestants than traditional superheroes. The title was laced with Milligan's satirical take on the superhero team as well as general toward the entire . Milligan and Allred would regularly play with killing off the title characters: In their first issue, they wiped out the entire team with only two exceptions.This dramatic revision of the series was not universally accepted. Many readers wanted "their" X-Force back, a complaint Milligan later parodied in the pages of the title. However, sales had increased and the title was receiving mainstream media coverage in the likes of "" magazine.

"X-Force" was canceled with issue 129 in 2002 and re-named "X-Statix"; it restarted with a new issue #1. "X-Statix" carried on the same themes as "X-Force", but with an increasingly satirical tone. Milligan planned to deploy Princess Diana as a character in a story-arc beginning in "X-Statix" #13: she was slated to return from the dead as a mutant superhero. However, when news of this leaked out to the media, a series of objections followed, most notably from the British tabloid newspaper "The Daily Mail". Quesada and Marvel announced that they would alter the character, replacing her with a fictional pop star named . [ [http://www.guardian.co.uk/monarchy/story/0,2763,984675,00.html Princess Diana, superhero] . "", June 25, 2003]

Although sales of the title peaked during this time, this effect was not to last long. After a story-arc that pitted X-Statix against The Avengers, low sales prompted the title's cancellation with issue #26, published in 2004. In the last issue Milligan and Allred killed off the entire team, serving up one one last parody of the superhero genre, while tying up the remaining plot threads.

published "X-Statix Presents: Dead Girl" in 2006. In the 5 issue mini-series, Dead Girl teams with to combat a group of villains who have returned from the dead. The series is written by Milligan, with covers by Allred. The storyline (which features the return of The Anarchist, The Orphan, and U-Go-Girl) parodies the manner in which creators in the industry handle death in comic books, with popular characters often brought back from the dead.

The team was a group of colorfully dressed and emotionally immature young mutants put together and marketed to be superstars first by the mysterious Coach and later by media mogul . Some of the members included:
*Anarchist, the team's self-proclaimed "token" Black Canadian, whose -like sweat enabled him to fire acidic energy bolts.
*Bloke, a mutant with the ability to change the color of his skin, like a ; certain color changes would enhance his strength. He revealed himself to be gay shortly before his death, although his first appearance was laden with blatant references to his homosexuality.
*, a literal dead girl who could reform her body and control its parts when dismembered, and could "read" the memories of dead bodies.
*Doop, a green, floating spheroid creature of unknown origins who spoke in a "language" all his own (represented in text by a special font), and who served as X-Force's cameraman. It was hinted many times that he might have been manipulating the team or that he was trying to control them in some clandestine way but nothing was ever resolved or proven.
*El Guapo, a sexy male mutant with a flying skateboard that had a mind of its own.
*, an inexplicably reanimated woman with enhanced physical abilities and empathy. Originally intended to be Princess Diana.
*Mysterious Fan Boy, the self-proclaimed greatest fan of X-Statix, he basically blackmailed his way into gaining team membership. When Orphan had had enough of him, he conscripted long-time ally Lacuna to inject him with a serum that would stop his heart. He had limited reality-warping powers and some of the acts he performed were illusion casting, animating dead bodies, rearranging items on a molecular level, creating explosions, and healing injuries.
*Orphan, aka Mister Sensitive, the team's "de facto" leader, a suicidal mutant with purple skin and two antennae protruding from his forehead who possessed heightened senses, superhuman speed, and the ability to levitate.
*Phat, an (eventually) openly gay pastiche who could harden, soften and increase the size of any part of his body by expanding his subcutaneous fat layer.
*Saint Anna, an Irish-Argentinian mutant with the ability to levitate and control the motion of objects as well as physically and mentally heal others.
*Spike, a controversial African American character who made fun of Anarchist for being white inside, even though his skin is black. He is capable of extending thin spikes from his body or launching them as projectiles.
*, a blue-skinned, redhead, narcoleptic teleporter who was once romantically linked to Zeitgeist and then to Orphan.
*, whose body was made entirely of crackling red energy that allowed her to teleport, project concussive blasts of energy, and heal minor wounds.
*, a bookish scholar who could transform himself into a wolf-like creature with enhanced senses, speed, agility, and razor sharp fangs and claws, and who briefly became Phat's lover.

*Coach, manipulative mentor of the team when it was still named X-Force. He has only one arm and red eyes. He was once called "The Arm" but it was never fully explained why. He had the second X-Force eradicated to start a new one. He had X-Statix capture a young mutant named Paco Perez to sell to Pharmaceutical companies but Orphan intervened and sent the boy away. He then tried to have Orphan killed but was eventually killed by a gunshot from U-Go Girl.
*, is an amoral billionaire with an addiction to thrills (he once voluntarily played Russian roulette). He assists the team by auditioning new members and by doing the team's public relations. Orphan kills him after he advocates the murders of innocent people.

*Lacuna, a young girl named Woodstock who set out to prove that she was worthy of membership into the then X-force by playing pranks on the members with the help of her powers. Even though she was more than capable, Orphan rejected her but on occasion would call upon her for help. When Orphan finally came to her to offer her membership, she declined, preferring instead to take up a spot as a host where she would expose the secrets of the stars. Her powers allow her to walk between the moments of time while everything else remains still.
*, mentor of the X-Men who assisted X-Statix on certain occasions. He constructed special suits to accommodate Orphan and Venus Dee Milo's mutations.
*Wolverine, an old friend of Doop who aided Orphan in taking down Coach and his back-up team. Wolverine also accompanied Doop in searching for the Pink Mink.

In Milligan and Allred's first issue of "X-Force", nearly the entire team was killed off in an incident called the Boyz 'R Us massacre. This precursory team, of which only U-Go Girl and Anarchist survived, also included:

*Battering Ram, who had superhuman strength, and durability as well as a thick skull which sported two ram-like horns and purple skin.
*, who could direct seismic energy from her body but only when she had consumed alcohol.
*La Nuit, a Frenchman who could generate a cloak of dark energy around him that would disperse light and control objects.
*, a living, lighter than air, liquid man who could control metabolic functions upon contact with another or through a spray from his hands.
*, who has a face composed of tentacles (he was actually dead before the Milligan run even began, but is seen on a videotape).
*Zeitgeist, the team leader who could vomit acidic ooze from his mouth. He conspired with Coach to have his teammates killed in the Boys R Us massacre, but he was caught in the crossfire and killed as well. He previously had a with U-Go Girl.

*In "X-Statix" #3, the names on the tombstones coincide with the names of characters from the TV show "" (Burns, Flanders, Simpson, Terwilliger, Wiggum, etc.).