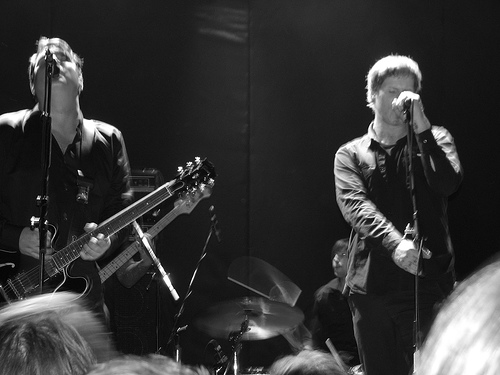 Greg Dulli (born ) is an American rock and .

Dulli was born and brought up in a working-class suburb of . Dulli's father's side of the family comes from -, and his mother comes from West Cork, Ireland. He first came to public attention in in the late 1980s with , when Dulli joined D.C. transplant bassist John Curley and , guitarist . The band was comic . One indie rock critic wrote that The Afghan Whigs were "the most cartoony band in all of hairdom".Fact|date=February 2007 Dulli's half-hour-long on-stage cigarette breaks, complete with running commentary on sexual politics and attempts at matchmaking at first enraged, but later fascinated the clientele.

Dulli's budding career in the rock and roll production business was halted as The Afghan Whigs began playing more and better gigs, drawing bigger and bigger crowds. The band was soon brought to the attention of in . Sub Pop's signing of The Afghan Whigs created quite a stir; they were the first non- band to record for the label. The Whigs split in 2001.

In 1994, Dulli was a lead vocalist in the , an alternative-rock supergroup that recorded the soundtrack to , "Backbeat". Other members of the Backbeat Band were (), Don Fleming (Gumball), (R.E.M.), (Nirvana, later ), and (). Dulli was the only musician that appeared on the first record aside from . He added a guitar part to the song "X-Static"

In 1997, Dulli (with and director ) bought the movie rights to a book by called but the film was never made. He is now the lead singer and main songwriter of the band who released their fourth album titled "" in May 2006.

In 2005 Dulli produced Ballads for Little Hyenas of the Italian Rock band, Afterhours.

Dulli is working with (, , ) in the project, . Lanegan also appears on EP, A Stitch In Time.

Dulli always marks the booklets to his records with sentences in nicely-clumsy Italian.

Greg Dulli is also an agnostic, though he was raised Catholic he denounced it in 1978.