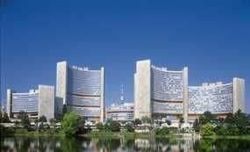 The organization is located at the Vienna International Centre, the office complex of the United Nations Office at Vienna.

The United Nations Office for Outer Space Affairs (UNOOSA) is an organization of the General Assembly charged with implementing the Assembly's outer space-related policies. It is located in the United Nations Office in Vienna. The Office implements the Program on Space Applications and maintains the Register of Objects Launched into Outer Space. The Office also provides support to developing nations in using space technology for economic development. It's current director is Mazlan Othman from Malaysia.

The United Nations Office for Outer Space Affairs was initially created as a small expert unit within the Secretariat to service the ad hoc Committee on the Peaceful Uses of Outer Space established by the General Assembly in its resolution 1348 (XIII) of 13 December 1958. It became a unit within the Department of Political and Security Council Affairs in 1962, when the permanent Committee on the Peaceful Uses of Outer Space met for the first time, and was transformed into the Outer Space Affairs Division of that Department in 1968. In 1992, the Division was transformed into the Office for Outer Space Affairs within the Department for Political Affairs. In 1993, the Office was relocated to the United Nations Office at Vienna. At that time, the Office also assumed responsibility for substantive secretariat services to the Legal Subcommittee, which had previously been provided by the Office of Legal Affairs in New York. Questions relating to the militarization of outer space are dealt by the Conference on Disarmament, based in Geneva.

The United Nations Office for Outer Space Affairs implements the decisions of the General Assembly and of the Committee on the Peaceful Uses of Outer Space. The office has the dual objective of supporting the intergovernmental discussions in the Committee and its Scientific and Technical Subcommittee (S&T) and Legal Subcommittee, and of assisting developing countries in using space technology for development. In addition, it follows legal, scientific and technical developments relating to space activities, technology and applications in order to provide technical information and advice to Member States, international organizations and other United Nations offices.

Mazlan Othman was rumored to be appointed by (UNOOSA) to be Earth's first extraterrestrial spokesperson.[1] After this rumor was reported on the news as true, the UN denied any such appointment.[2]

The rumour was also rejected by National Space Agency Malaysia director-general Dr. Mustafa Din Subari, who told that UNOOSA head Datuk Mazlan Othman, had confirmed to him in an email that there was no such appointment. If any such appointment was to have been made, however, Dr. Subari confirmed that Mazlan would have been the best candidate for the job: “You do not want a spokesman from just anywhere. Mazlan is in the highest position of outer space affairs.” “Coupled with her credentials as an astrophysicist, she would be the most appropriate candidate to take up such a role,” he said of his predecessor, whose position he took over in 1999 after Mazlan left to assume her role in UNOOSA. Dr. Subari added that scientists worldwide were still hopeful about communication with extra-terrestrial life: “Theoretically, scientists internationally are still confident in the existence of extra-terrestrial life as we have found other solar systems, although we cannot yet ascertain whether there is life in those systems,”.[3]