Molly Hatchet is an American southern rock band formed in Jacksonville, Florida, in 1975. They are widely known for their hit song "Flirtin' with Disaster" from the album of the same title. The band, founded by Dave Hlubek and Steve Holland, took its name from a prostitute who allegedly mutilated and decapitated her clients.[1] Most of Molly Hatchet album covers feature eye-catching heroic fantasy inspired art, some of which were painted by renowned artists, like Frank Frazetta and Boris Vallejo.[2]

Based in Jacksonville, Florida, Molly Hatchet shared influences and inspiration with the most well-known act in the Southern rock genre, Lynyrd Skynyrd as well as another up-and-coming Southern rock act, .38 Special, who referred them to manager Pat Armstrong.[3] His interest in Molly Hatchet led to a recording contract with Epic Records, bringing in Tom Werman as a producer. Werman had already worked with acts such as Cheap Trick, Stranger and Ted Nugent.[4] Ronnie Van Zant was slated to produce Molly Hatchet's first album, having helped in writing arrangements and directing rehearsals prior to his fatal airplane crash. Molly Hatchet actually cut their first demos in Lynyrd Skynyrd's 8-track recording studio using their equipment.[3]

Prior to the band's signing with Epic Records, they often toured the Florida roadhouse and bar circuit. Dave Hlubek was the band's vocalist prior to Danny Joe Brown, and wrote and co-produced many of the band's songs. Hlubek has stated that the demise of Lynyrd Skynyrd – who were at the height of their success – opened the door for Molly Hatchet.[3]

The result of the teaming of Tom Werman, a producer known for working with straight hard rock acts, with a Southern-influenced band led to a new development in the Southern rock genre. Combining boogie, blues and hard rock, Molly Hatchet's sound was different from more country-influenced acts such as Outlaws. Like the area's other Southern rock acts, their music typically expressed the values, hopes and excesses of 1970s-era young adults in a Southern metropolitan area like Jacksonville, in addition to Southern ("Gator Country", "Sweet Dixie") and Western themes ("Edge of Sundown", "Bounty Hunter", "Gunsmoke").

The band recorded and released their first album, Molly Hatchet in 1978, followed by Flirtin' with Disaster in 1979. Molly Hatchet proceeded to tour behind the record, building a larger fan base. Danny Joe Brown, whose gruff voice and tough yet amicable persona had defined the act to that point, left the band in 1980, only to return two years later.[5]

When Brown left the group to form The Danny Joe Brown Band with future Molly Hatchet guitarist Bobby Ingram, he was replaced by vocalist Jimmy Farrar, coming from the cover band Raw Energy out of Fort Walton Beach, Florida. Along with Farrar came a new approach to the band's sound. The earlier albums feature more variation in guitar tone and style and exhibit a distinct southern cultural influence – which changed with the addition of Farrar on vocals. By this time, acts such as Van Halen had made harder heavy metal-influenced rock popular in the 1980s. This fact was not lost on the band and their producer. Danny Joe Brown's stage persona, gruff voice and cowboy horse-whistling had matched well with the overtly southern-influenced sounds of his era. Farrar's new vocal style, mixed with a new harder-rocking sound saw Molly Hatchet enjoy a rise in popularity in the early 1980s. As part of this trend, also .38 Special enjoyed a string of hits and MTV videos in the early 1980s with a polished style that had moved even farther from the traditional country/southern sound. 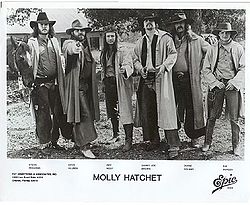 With the success of the more, harder-rocking Beatin' the Odds release, the band ventured even farther away from the southern rock sound of their first albums. By 1981, Molly Hatchet had almost completely abandoned their original style of 1978 for a straight-ahead rock style and a slicker production, exhibited on the Take No Prisoners release of the same year.[2] This album had a less than warm reception from many of the fans of the first hour, but the band remained still a successful act on the touring circuit. Founding member and bass player Banner Thomas left in late 1981 and was replaced by Riff West, while Farrar left Molly Hatchet in May 1982 to mind to his own family.[2] He would later rejoin other members of Molly Hatchet in Southern Rock Allstars and Gator Country.

Brown rejoined the band in 1982 and B. B. Borden (also known as B. B. Queen when he played in the funk rock band Mother's Finest) replaced Crump on drums. In 1983, this line-up released a new album titled No Guts...No Glory. Steve Holland left the band in 1984 and was replaced by keyboardist John Galvin, putting an end to Molly Hatche characteristic of having three lead guitarists. This period saw the band return to the more overt southern style it had displayed on its debut record in 1978. However, with the addition of keyboards into the mix, the band managed to take this sound to an even more orchestrated approach on some songs such as "Fall of the Peacemakers". Critics hailed No Guts...No Glory as the band's true return to form, but southern rock no longer enjoyed the widespread appeal it had previously. As a result, the record went largely unnoticed, in contrast to the glory years of 1979's Flirtin' with Disaster, but did rejuvenate interest from the band's fan base, who had started to drift after the uncharacteristic Take No Prisoners album of 1981.

In 1984 came the release of the album The Deed Is Done, a straightforward pop/rock offering,[1] with Bruce Crump back behind the drum kit to replace B. B. Borden. Then in 1985, the double live album Double Trouble Live was released. The greatest hits collection Greatest Hits was also released in 1985 and was to this date the last Molly Hatchet album to achieve gold status.[6] Hlubek left in early 1987 to recover from his drug addiction.[3] In 1989, the album Lightning Strikes Twice was released, the first to feature Hlubek's replacement Bobby Ingram, who had already been a guitarist in The Danny Joe Brown Band. 1990 saw the announcement of Molly Hatchet's final show in Ohio, before their disbandment.

The 1990 retirement announcement couldn't keep a revised band from reforming around Brown and Ingram. A new line-up of Molly Hatchet played selected shows and tours, but pulled back from recording new albums for five years. However, by the mid-1990s, they were again working on a new studio album with German producer Kalle Trapp. However in 1996, after a stroke and a worsening of his chronic diabetes, Brown had to leave the band, bringing in lead singer Phil McCormack (formerly of the Northern Virginia bands Jazzbo McMann and The Dixie Roadducks) to finish the album Devil's Canyon.

During the rest of the 1990s, the band's line-up curiously contained not a single original member who had performed in Molly Hatchet prior to 1984; Bobby Ingram had obtained a license from the original members to work with the name.[7] As Ingram had recorded on the last Molly Hatchet album that featured the original members, he was technically considered an "original" member himself, as was John Galvin.[7] Tours during the late 1990s saw enthusiastic audiences largely unconcerned with this fact. At this point, the band consisted of vocalist Phil McCormack, guitarists Bobby Ingram and Bryan Bassett (former Wild Cherry), keyboardist John Galvin, bassist Andy McKinney, and drummer Mac Crawford. In 1998, this line-up band recorded the album Silent Reign of Heroes.

In 1999, the band traveled coast to coast with Charlie Daniels and the Volunteer Jam. Guitarist Mike Owings joined in June 1999 and toured until March 2000, when he departed due to health reasons. This was the last line-up which included three guitarists.

In 2000, the album Kingdom of XII was recorded and released in Europe, where the band went on tour to promote the album. It was released in the United States in 2001. Locked and Loaded, 25th Anniversary: Best of Re-Recorded (2003) and Warriors of the Rainbow Bridge (2005) followed.

In June 2000, Ingram became the sole owner of the trade and service mark "Molly Hatchet", acquired from Pat Armstrong the original manager of the band. In January 2005, Ingram invited Hlubek to rejoin Molly Hatchet where he remains today.

Danny Joe Brown died on March 10, 2005, less than an hour after returning to his home in Davie, Florida from a four week hospitalization. He was 53. He had previously left the group after suffering a massive stroke in 1995 while driving to his brother's house.[5] In defiance of a long battle with diabetes and the effects of the stroke, Brown was able to take the stage one last time at the Jammin' for DJB benefit concert in 1998 where, with the help of his friends, he ended the show with "Flirtin' with Disaster".[7]

On Monday, June 19, 2006, founding guitarist Duane Roland died at his home in St. Augustine, Florida at the age of 53. His death was listed as being of "natural causes" according to a June 25, 2006 obituary in the Boston Globe.[8]

Former Molly Hatchet members Steve Holland, Bruce Crump, Jimmy Farrar and Riff West still perform together in a group called Gator Country. Original guitarist Duane Roland also played in this group from its inception in 2005 until his death in 2006.