On the death of his father in 511, he received, as his share of the kingdom, the town of Soissons, which he made his capital; the cities of Laon, Noyon, Cambrai, and Maastricht; and the lower course of the Meuse River. But he was very ambitious, and sought to extend his domain. 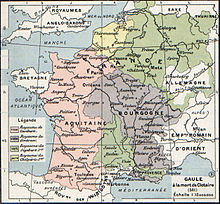 The division of Gaul upon Chlothar's death (561).

He was the chief instigator of the murder of his brother Chlodomer's children in 524, and his share of the spoils consisted of the cities of Tours and Poitiers. He took part in various expeditions against Burgundy and, after the destruction of that kingdom in 534, obtained Grenoble, Die, and some of the neighbouring cities.

When the Ostrogoths ceded Provence to the Franks, he received the cities of Orange, Carpentras, and Gap. In 531, he marched against the Thuringii with his nephew Theudebert I and in 542, with his brother Childebert I against the Visigoths of Spain. On the death of his great-nephew Theodebald in 555, Chlothar annexed his territories. On Childebert's death in 558 he became sole king of the Franks.

He also ruled over the greater part of Germany, made expeditions into Saxony, and for some time exacted from the Saxons an annual tribute of 500 cows. The end of his reign was troubled by internal dissensions, his son Chram rising against him on several occasions. Following Chram into Brittany, where the rebel had taken refuge, Chlothar shut him up with his wife and children in a cottage, which he set on fire. Overwhelmed with remorse, he went to Tours to implore forgiveness at the tomb of St Martin, and died shortly afterwards at the royal palace at Compiègne.

Chlothar's first marriage was to Guntheuc, widow of his own brother Chlodomer, sometime around 524. They had no children. His second marriage, which occurred around 532, was to Radegund, daughter of Bertachar, King of Thuringia, whom he and his brother Theuderic defeated. She was later canonized. They also had no children. His third and most successful marriage was to Ingund, by whom he had five sons and two daughters:

His next marriage was to a sister of Ingund, Aregund, with whom he had a son, Chilperic, King of Soissons. His last wife was Chunsina (or Chunsine), with whom he had one son, Chram, who became his father's enemy and predeceased him. Chlothar may have married and repudiated Waldrada