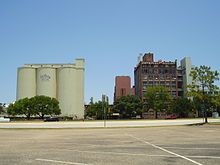 Another view of the sugar factory in Sugar Land

Imperial Sugar (NASDAQ: IPSU) is a major U.S. sugar producer and marketer based in Sugar Land, Texas, with sugar refinery operations in California, Georgia, and Louisiana.

The company has, since its inception, been headquartered in Sugar Land; the city itself is named for the company and the company's crown logo is featured in the city's seal. The company was founded in 1843 by Samuel May Williams and passed through a series of owners until its purchase in 1907 the I. H. Kempner family of Galveston. The company was later renamed the Imperial Sugar Company, in an effort to emphasize quality.[2] Up until 1988 the company had only one plant, at its original location in Texas, when they purchased the Holly Sugar Corporation—a sugar beet processor headquartered in Colorado Springs. Since that initial acquisition the company has made several more that effectively doubled the corporation's size each time.

On January 17, 2001, the company filed Chapter 11 bankruptcy protection, attributing its problems to lower sales for refined sugar as well as higher energy costs. Then on August 29, 2001, the company emerged from Chapter 11 and has since turned its focus inward as it downsizes its operations. In 2003, Imperial won the Wharton Infosys Business Transformation Award for their innovative use of web technology to help turn around their business. The company no longer refines sugar at its original plant in Sugar Land (the facility was closed in 2003) but their corporate headquarters are still located in its founding city.

On December 19, 2010, two buildings of the Sugar Land factory were demolished by explosion demolition to spread the development of the property for residences, business properties and park land.[3][4]

On 7 February 2008, an explosion—possibly caused by static electricity igniting fine sugar dust that had become too dry—at a Port Wentworth, Georgia, Imperial Sugar refinery killed 14 people and injured over 40. OSHA had been criticized in a 2006 US Chemical Safety Board report for lack of preparation for such explosions and a safety program which "inadequately addresses dust explosion hazards".[5] [1]

The plant, originally built as the Dixie Crystals sugar refinery in 1916-1917, was acquired by Imperial Sugar in 1997. At the time of its purchase, the Port Wentworth refinery was the second-largest sugar refining operation in the U.S.[6] As of August 26, 2008, the death toll had risen to 14, with one still in critical condition.[7]