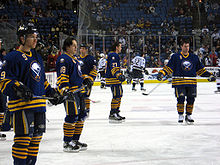 Several Sabres players during warm-up prior to a game.

The Buffalo Sabres are a professional hockey team that came into existence in 1970 and have participated in 41 National Hockey League Entry Drafts. The Sabres also made selections in six NHL Supplemental Drafts.

This list features every player drafted by the Sabres and his regular season stats for his career. All stats are current as of the October 7, 2011. Players whose names appear in bold are on the current Sabres roster.

Martin Biron played for the Sabres for nine seasons before being traded to the Philadelphia Flyers in 2007.[2]

Brian Campbell was elected to the 2007 NHL All-Star Game as a starting defenceman.[3]

Jhonas Enroth, a Swedish goaltender, was drafted by the Sabres in the second round of the 2006 NHL Entry Draft.

Alexander Mogilny, shown here as a member of the AHL's Albany River Rats, holds the Sabre record for goals in a season: 76 in 1992–93.[4]

Wayne Primeau, shown here playing for the Calgary Flames, was part of the Sabre team which advanced to the Stanley Cup Finals in 1999.[5]

Derek Roy was one of three second-round draft picks made by the Sabres in 2001.[6]

1974: The 183rd pick of the draft was an invalid claim for the fictional player Taro Tsujimoto of the Tokyo Katanas. The pick stood as valid for several weeks until it was revealed that the player was made up.

1984: The 186th pick of the draft was an invalid claim for Eric Weinrich, who had yet to clear the minimum age restriction for eligible draftees. He was selected the following year by the New Jersey Devils.