Direct action is activity undertaken by individuals, groups, or governments to achieve political, economic, or social goals outside of normal social/political channels. This can include nonviolent and violent activities which target persons, groups, or property deemed offensive to the direct action participant. Examples of direct action can include strikes, workplace occupations, sit-ins, graffiti, sabotage, hacktivism, property destruction, assault and murder. By contrast, electoral politics, diplomacy and negotiation or arbitration do not constitute direct action, as they are politically mediated. Non-violent actions are sometimes a form of civil disobedience, but some (such as strikes) do not always violate criminal law. Their aim is to either obstruct another political agent or political organization from performing some practice to which the activists object; or to solve perceived problems which traditional societal institutions (governments, powerful churches or establishment trade unions) are not addressing to the satisfaction of the direct action participants. 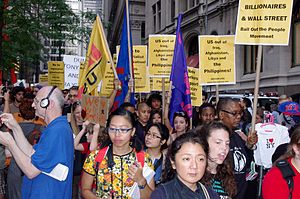 In general, direct action is often used by those seeking social change, in some cases, revolutionary change. It is central to autonomism and has been advocated by a variety of Marxists and anarchists, including syndicalism, anarcho-communism, insurrectionary anarchism, green anarchism, Marxist humanists, anarcho-primitivist and pacifists.

A Shell to Sea campaigner disrupts drilling for the Corrib gas project.

Direct action tactics have been around for as long as conflicts have existed but it is not known when the term first appeared. The radical union the Industrial Workers of the World first mentioned the term "direct action" in a publication in reference to a Chicago strike conducted in 1910.[1] Other noted historical practitioners of direct action include the US Civil Rights Movement, the Global Justice Movement, the Suffragettes, revolutionary Che Guevara, and certain environmental advocacy groups.

American anarchist Voltairine de Cleyre wrote a famous essay called "Direct Action" in 1912[2] which is widely cited today. In this essay, de Cleyre points to historical examples such as the Boston Tea Party and the American anti-slavery movement, noting that "direct action has always been used, and has the historical sanction of the very people now reprobating it."[3]

In his 1920 book, Direct Action, William Mellor placed direct action firmly in the struggle between worker and employer for control "over the economic life of society." Mellor defined direct action "as the use of some form of economic power for securing of ends desired by those who possess that power." Mellor considered direct action a tool of both owners and workers and for this reason he included within his definition lockouts and cartels, as well as strikes and sabotage. However, by this time the US anarchist and feminist Voltairine de Cleyre had already given a strong defense of direct action, linking it with struggles for civil rights:

"...the Salvation Army, which was started by a gentleman named William Booth was vigorously practising direct action in the maintenance of the freedom of its members to speak, assemble, and pray. Over and over they were arrested, fined, and imprisoned ... till they finally compelled their persecutors to let them alone." (de Cleyre, undated)

Dr. Martin Luther King felt that non-violent direct action's goal was to "create such a crisis and foster such a tension" as to demand a response.[4] The rhetoric of both Martin Luther King and Mohandas Gandhi promoted non-violent revolutionary direct action as a means to social change in some circumstances, while supporting armed insurrection in circumstances where nonviolence was ineffective, such as in Palestine and Vietnam.[5]

By the middle of the 20th century, the sphere of direct action had undoubtedly expanded, though the meaning of the term had perhaps contracted. Most campaigns for social change—notably those seeking suffrage, improved working conditions, civil rights, abortion rights or an end to abortion, an end to gentrification, and environmental protection—employ at least some types of violent or nonviolent direct action.

Some sections of the anti-nuclear movement used direct action, particularly during the 1980s. Groups opposing the introduction of cruise missiles into the United Kingdom employed tactics such as breaking into and occupying United States air bases, and blocking roads to prevent the movement of military convoys and disrupt military projects. In the US, mass protests opposed nuclear energy, weapons, and military intervention throughout the decade, resulting in thousands of arrests. Many groups also set up semi-permanent "peace camps" outside air bases such as Molesworth and Greenham Common, and at the Nevada Test Site.

Anti-abortion groups in the United States, particularly Operation Rescue, often used non-violent sit-ins at the entrances of abortion clinics as a form of direct action in the late 1980s and early 1990s.

Anti-globalization activists made headlines around the world in 1999, when they forced the Seattle WTO Ministerial Conference of 1999 to end early with direct action tactics. The goal that they had, shutting down the meetings, was directly accomplished by placing their bodies and other debris between the WTO delegates and the building they were meant to meet in. Activists also engaged in property destruction as a direct way of stating their opposition to corporate culture -- this can be viewed as a direct action if the goal was to shut down those stores for a period of time, or an indirect action if the goal was influencing corporate policy.

One of the largest direct actions in recent years took place in San Francisco the day after the Iraq War began in 2003. Twenty-thousand people occupied the streets and over 2,000 people were arrested in affinity group actions throughout downtown San Francisco, home to military-related corporations such as Bechtel. (See March 20, 2003 anti-war protest).

Direct action has also been used on a smaller scale. Refugee Salim Rambo was saved from being deported from the UK back to the Democratic Republic of the Congo when one person stood up on his flight and refused to sit down. After a two-hour delay the man was arrested, but the pilot refused to fly with Rambo on board. Salim Rambo was ultimately released from state custody and remains free today.

Destroying fences at the border by the AATW, 2007

Non-violent direct action (NVDA) is any form of direct action that does not rely on violent tactics. Mohandas Gandhi's teachings of Satyagraha (or truth force) have inspired many practitioners of nonviolent direct action, although the use of nonviolence does not always imply an ideological commitment to pacifism. In 1963, civil rights leader Martin Luther King Jr. described the goal of NVDA in his Letter from Birmingham Jail:

Nonviolent direct action seeks to create such a crisis and foster such a tension that a community which has constantly refused to negotiate is forced to confront the issue. It seeks so to dramatize the issue that it can no longer be ignored.[4]

One major debate is whether destruction of property can be included within the realm of nonviolence. This debate can be illustrated by the response to groups like the Earth Liberation Front and Animal Liberation Front, which use property destruction and sabotage as direct action tactics. Although these types of actions are prosecuted as violence, those groups justify their actions by claiming that violence is harm directed towards living things and not property. Both, however, have been implicated in indisputably violent acts against corporations and scientists who use animal testing, including arson and bombings.

In the United States, the term has largely come to signify civil disobedience, and protest in general. In the 1980s, a California direct action protest group called Livermore Action Group called its newspaper Direct Action. The paper ran for 25 issues, and covered hundreds of nonviolent actions around the world. The book Direct Action: An Historical Novel took its name from this paper, and records dozens of actions in the San Francisco Bay Area.

Human rights activists have used direct action in the ongoing campaign to close the School of the Americas, renamed in 2001 the Western Hemisphere Institute for Security Cooperation. As a result, 245 SOA Watch human rights defenders have collectively spent almost 100 years in prison. More than 50 people have served probation sentences.

"Direct Action" has also served as the moniker of at least two groups: the French Action Directe as well as the Canadian group more popularly known as the Squamish Five. Direct Action was also the name of the magazine of the Australian Wobblies. The UK's Solidarity Federation currently publishes a magazine called Direct Action.

Until 1990, Australia's Socialist Workers Party published a party paper also named "Direct Action", in honour of the Wobblies' history. One of the group's descendants, the Revolutionary Socialist Party, has again started a publication of this name.[6]

Food Not Bombs is often described as direct action because individuals involved directly act to solve a social problem; people are hungry and yet there is food available. Food Not Bombs is inherently dedicated to non-violence.

Violent direct action is any direct action which utilizes physical injurious force against persons or property[citation needed]. While groups such as Animal Liberation Front claim that destruction of property is not violence, US and international law include acts against property in the definition of violence.[7][8] Examples of violent direct action include: destruction of property, rioting, class intimidation such as lynching, terrorism, political assassination, and armed insurrection.

An example group that promotes direct action against property is Sea Shepherd Conservation Society, which boasts of having sunk several illegal whaling or fisheries vessels, though intentionally without loss of life.

The environmental direct action movement in the United Kingdom started in 1990 with the forming of the first UK Earth First! group. The movement rapidly grew from the 1992 Twyford Down protests, culminating in 1997.

There are now several organisations in the United Kingdom campaigning for action on Climate Change that use non-violent direct action. Including Camp for Climate Action, Plane Stupid and Greenpeace. This has resulted in environmental campaigners being labelled as extremists by the Ministry of Justice[9]

Some groups which employ direct action