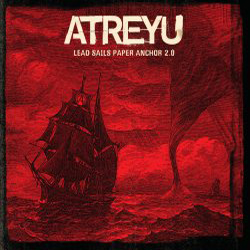 
"Lead Sails Paper Anchor" is the fourth studio album by Atreyu. It is the band's first release with . The album was released on , . The first single is "." The complete album (excluding bonus tracks), was leaked onto P2P file sharing networks on August 19th, 2007.Fact|date=November 2007The album shows the band's Post-Hardcore roots but also shows the bands growth into and as well. Also, the album has a softer sound than previous albums.

A single for "" was released exclusively in on July 24 and it included a demo of the song "".

The album debuted at #8 on the . [Jonathan Cohen, [http://www.billboard.com/bbcom/news/article_display.jsp?vnu_content_id=1003635057 "'High School Musical 2' Starts Third Week At No. 1"] , Billboard.com, September 5, 2007.] Doomsday was released as the second single but only in the UK. "Falling Down" was released as the third single and second in the US. Slow Burn has been confirmed to be the next single.

On , 2008, the album was re-released as "Lead Sails Paper Anchor 2.0", which included updated artwork and a new song titled "The Squeeze" recorded exclusively for the re-release, plus the two bonus tracks "Epic" and "Clean Sheets". It was formatted in the format, featuring exclusive videos, live performances, behind the scenes tour clips, and a digital guitar lesson. The song "Doomsday" is featured in the background of the current X-Games tv commercial. [citeweb|url=http://www.roadrunnerrecords.com/blabbermouth.net/news.aspx?mode=Article&newsitemID=93290|title=roadrunnerecord.com|accessdate=17 April|accessyear=2008]

Before the release of the album, Atreyu made available a jigsaw puzzle game for fans eager to hear a song from the new album. Each puzzle piece was a 10-second sound bite of the first single off the album, "Becoming the Bull". The object of the game was to arrange the clips in order, and create the song. As an additional incentive, the fan to put the song together the fastest would win a signed guitar, a phone call from the band, an advance copy of the CD and a free membership to Atreyu's fan club. [ [http://www.roadrunnerrecords.com/BLABBERMOUTH.net/news.aspx?mode=Article&newsitemID=75196 "ATREYU: New Album Details Revealed - June 20, 2007"] "". Retrieved on August 9, 2008] The game was posted on the band's official website, and was taken down shortly after the album was released.

In promotion for the next major single off the album, Atreyu released a game created by Jason Oda, based on their single, "Falling Down". The game allows you to play as all of the members of the band, with each of them having their own unique gameplay type and levels. In lead singer Alex Varkatzas' game, "Alex Slaughters Cute Stuff," users dodge rainbows and hearts while slaughtering teddy bears. Other games include: "Dan Becomes Guitar Hero" a game similar to , "Travis Makes McTreyu Burgers" a remake of the 1982 arcade game , "Marc Busts Ghosts" a game similar to , and "Brandon Falls Down Into Hell" where the Brandon Saller character fights off creatures from hell while collecting ice cream cones.

In an [http://www.youtube.com/watch?v=XPAEcnpVWHQ interview] with Brandon Saller and Marc McKnight of Atreyu, when asked about the game they said,

[McKnight] "Jason Oda's, the guy that designed it that does the games like that, I've been a huge fan of his artwork and his games for years now. And then I got an email when he had already completed the first proof of the game. I was like, 'Oh my God, he made one for us?'" [Saller] "We liked the video game for 'Becoming The Bull,' but it was kind of like a quiz thing. It wasn't really a game, but this is a full-fledged video game. It's hilarious. We all have our own levels, it's hilarious. I highly recommend kids to play it if you play video games. Even if you don't, I don't even play video games and I sat there for like an hour playing it. It's hard."

"The Atreyu game is a mix between old school arcade game play and modern polished graphics. The inspiration for the game partially comes from the arcade game for the band Journey."

* All Music and Lyrics by Atreyu