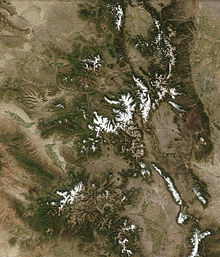 The following table lists the major mountain ranges of the U.S. State of Colorado.