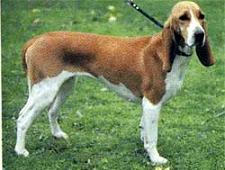 The Swiss Hound has very ancient origins. Its presence in times of the Roman is certified on a mosaic, discovered at , by the representation of packhounds corresponding to the varieties of Swiss hounds. In the 15th century, it was sought after by Italian dog lovers and in the 18th century, by the French, for its exceptional aptitude for hunting hare. Its native lines have certainly been influenced by scenthounds of French breeding brought back to Switzerland by mercenaries. In 1882, a standard was established for each of the five varieties of the Swiss Hound. In 1909, those standards were revised and the total disappearance of the hound of Thurgovie was noted. On 22nd of January 1933, one single standard was established for the 4 varieties of the Swiss Hound. The ancient variety, the hound of the Jura type St. Hubert, has in the meantime disappeared.

The Schweizer Laufhund is of medium size; it has good conformation indicating strength and endurance; it has a lean head and long muzzle with long leathers giving an air of nobility. There are 4 varieties of the Swiss Hound :
*ese Hound,
* Hound, (no longer seen)
* Hound,
* Hound.