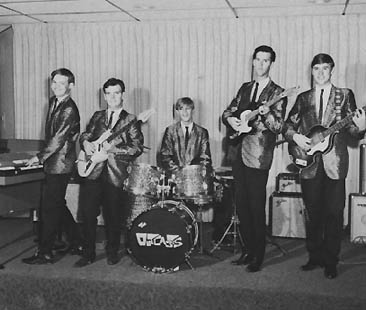 "The Outcasts" is a and band from that released a total of five singles between 1965 and 1967. They are justly famous for two classic songs, "I'm in Pittsburgh (And it's Raining)" and "1523 Blair", although their recordings have been reissued on literally dozens of s of this type of music. They are the best known of at least 10 bands of this name that were active in the mid-1960s ["Searchin' for Shakes" on-line database, "Ugly Things" fanzine.] .

History of the Band

"The Outcasts" were formed in late 1963 by Buddy Carson, Rickey Wright and Denny Turner [Bandmember Denny Turner's website on the Outcasts, www.dennysguitars.com/outcasts1.html] . In late 1964, Jim Carsten and then Jim Ryan joined the band [A 2002 posting on www.angelfire.com by Jim Ryan, a former bandmember.] . This line-up prevailed until the band's fifth single, when Galen Niles replaced Denny Turner on guitar. In 1964, Denny designed a logo and slogan for the band, "Music from the OUTER LIMITS" (inset), taken from the name of the popular TV show of the period, . The band had the logo emblazoned on the backs of their uniforms and also issued business cards with a similar design.

Early direction for the band came from , whose many later musical credits include producing the first three albums for and creating the for , , and many other TV shows. Post was the songwriter and producer of the band's first single [Review from Fuzz, Acid and Flowers, partially reproduced on Denny Turner's website] . He also recruited "the Outcasts" as the back-up band for a performance by (who was active in the New York folk music scene) and (who later worked in films and on ).

By 1968, however, the band had broken up, as is true of nearly all of the garage rock bands of this period.

As documented on the website on the band created by bandmember Denny Turner, "the Outcasts" had all of the trappings of a successful rock band: a succession of managers (Sally Senter and Major John Carson), go-go dancers, a fan club with a regular newsletter, and adoring fans. Their many performances at area military clubs led to their being an opening act for in and Austin. In 1965, "the Outcasts" were even invited to appear in Houston with but turned down the opportunity; took their place in the concert.

In May 1966, "the Outcasts" shared a twin bill with the legendary (ticket pictured) and also appeared at Texas Teen Fairs and other venues with such popular music stars as , , , and . [Denny Turner's website, op. cit.]

"The Outcasts" regularly participated in "Battle of the Bands" competitions, usually placing first or second [Ibid.] ; and in 1966, the band won the statewide competition. [Jim Ryan posting, op. cit.] This is truly an amazing feat during that peak year of garage rock fervor, considering the large number of superb bands that were active in then. No other state is so heavily collected today in s of and music; as one example, the landmark devotes 5 of their 23 volumes to bands from Texas.

"I'm in Pittsburgh (And it's Raining)" is a classic song that embodies much of the innocence and charm of this style of music, along with the general lack of slick production that either attracts or repels listeners. This was the band's most successful single, receiving national airplay and charting locally in San Antonio and also in and . The opening lyrics – "I'm in Pittsburgh and it's rainin' / I'm sittin' in the subway here complainin' " – combine a near non sequitur with an error of fact ( doesn't have a subway system – which cooled off the initial rush of record sales in that city after listeners began to notice [Ibid.] ). No matter: The strong musicianship made it a natural for inclusion in the first of the Pebbles s. The album's original call this song a "blistering punk-rocker, which has been compared to at their best."

As testimony to its status as a touchstone for garage rock fans everywhere, numerous bands have released covers of this song over the years. Probably the best known is the 1990 cover by the Cynics, who are actually from ; others have been recorded by punk legends the Flies, as well as and . In fact, the original version of the song was re-pressed in 1977 as a in and marketed to new wave fans, with the band name changed to the Kicks [Original liner notes, Pebbles, Volume 1] .

The band's final single, "1523 Blair" is something else again, with an introduction of a sort of wind-up followed by searing guitar riffs played at a furious pace, then barely intelligible lyrics – few songs are ever played so fast. The title is taken from the address of ' recording studio in ; he is ' brother. One recent reviewer remarked: "The music on this selection is jarringly experimental, the spirit is possessed fervor. '1523 Blair' is one minute and forty seven seconds long because it couldn’t have possibly been any longer" [Posting on www.officenaps.com, February 5, 2007] . This song inspired the name of a British band, ( released their single album in 1993 but only after the band had already broken up).

The band successfully tried their hand at nearly everything, from s ("What Price Victory?"), to ("Sweet Mary"), to instrumentals ("Come on Over" and "The Birds"), to romantic ballads ("I'll Set You Free" and "Everyday"). "The Outcasts" also played fine covers, notably "" and "Route 66."

Annoyingly, the 1995 of the band's music by – which has only 15 tracks – omits the band's first single; according to the CD's brief liner notes, it is "not up-to-par with their subsequent releases." [Liner notes, I'm in Pittsburgh and it's Raining CD] Since neither side has yet been issued on a , we have only former bandmember Jim Ryan's description: "Nothing Ever Comes Easy" is "a very tender, yearning ballad with some nice changes and arrangement by a talented composer. The B/side [is] a surf instrumental that rocked in fifths to give that Asian sound." [Jim Ryan posting, op. cit.]

Confusion with Other Bands

"The Outcasts" (or variations on that name) has been a fairly common name for rock bands for many years, and as noted already, at least 10 bands were using this name during the mid-1960s. This has led to some confusion of this band with others using that name. Probably the most common misconception has to do with another band called "the Outcasts" that backed on several marvelous tracks recorded in the mid-1960s [Fuzz, Acid and Flowers, op. cit.] . She was a featured artist on a compilation album on female artists from Texas, , and the liner notes suggested that this band had backed her on these songs. This was a natural mistake, since King is from Houston, and the that released the final single by "the Outcasts", was based there.

Unlike most mid-1960s rock bands, "the Outcasts" have a strong military connection – even their anti-war song, "What Price Victory?" is dominated by military-style s. During his association with the band, Mike Post was in – probably at nearby , but this is not certain. [Jim Ryan posting, op. cit.] Galen Niles became the new lead guitarist after Denny Turner joined the to serve as a pilot in the . Particularly in the early part of their career, the band mainly appeared at local military clubs. Finally, the second manager of "the Outcasts", Major John Carson (later a Colonel) – the father of bandmember Buddy Carson – was a bonafide and has written on-line books about his wartime experiences. [Denny Turner website, op. cit.]

Denny Turner continues to write and record music, and he also sells and repairs vintage guitars for his store called Denny's Guitars, based in northern Oahu, Hawaii. He is also a multi-media artist and music teacher and has a home recording studio.

Jim Ryan is a public school music teacher in who owns and manages Braindance Ink, a multi-lingual music production company specializing in the creation of songs, dances and games based on folk music for music education classes.

Jim Carsten went into law enforcement and was once a county sheriff; he is now a security consultant.

Buddy Carson died from complications of hepatitis in 1968.

Rickey Wright died in an automobile accident in 2000.

"I’m in Pittsburgh (And it’s Raining)"