Class struggle is the active expression of a class conflict looked at from any kind of socialist perspective. Karl Marx and Friedrich Engels wrote "The [written][1] history of all hitherto existing society is the history of class struggle".[2]

Marx's notion of class has nothing to do with social class in the sociological sense of upper, middle and lower classes (which are often defined in terms of quantitative income or wealth). Instead, in an age of capitalism, Marx describes an economic class.

Membership in a class is defined by one's relationship to the means of production, i.e., one's position in the social structure that characterizes capitalism. Marx talks mainly about two classes that include the vast majority of the population, the proletariat and the bourgeoisie. Other classes such as the petty bourgeoisie share characteristics of both of these main classes (see below).

What Marx points out is that members of each of the two main classes have interests in common. These class or collective interests are in conflict with those of the other class as a whole. This in turn leads to conflict between individual members of different classes.

An example of this would be a factory producing a commodity, such as the manufacture of widgets (a standard imaginary commodity in economics books). Some of the money received from selling widgets will be spent on things like raw materials and machinery (constant capital) in order to build more widgets. Similarly, some money – variable capital – is spent on labor power. The capitalist would not be in business if not for the surplus value, i.e., the money received from selling the widgets beyond that spent on constant and variable capital. The amount of this surplus value – profits, interest, and rent – depends on how much labor workers do for the wages or salaries they are paid, as well as the amount of income generated from the sale of the product.

Not all class struggle is violent or necessarily radical (as with strikes and lockouts). Class antagonism may instead be expressed as low worker morale, minor sabotage and pilferage, and individual workers' abuse of petty authority and hoarding of information. It may also be expressed on a larger scale by support for socialist or populist parties. On the employers' side, the use of union-busting legal firms and the lobbying for anti-union laws are forms of class struggle.

Not all class struggle is a threat to capitalism, or even to the authority of an individual capitalist. A narrow struggle for higher wages by a small sector of the working-class (what is often called "economism") hardly threatens the status quo. In fact, by applying "craft union" tactics of excluding other workers from skilled trades, an economistic struggle may even weaken the working class as a whole by dividing it. Class struggle becomes more important in the historical process as it becomes more general, as industries are organized rather than crafts, as workers' class consciousness rises, and as they self organize away from political parties. Marx referred to this as the progress of the proletariat from being a class "in itself" (a position in the social structure) to being one "for itself" (an active and conscious force that could change the world).

Marx thought that this conflict was central to the social structure of capitalism and could not be abolished without replacing the system itself. Further, he argued that the objective conditions under capitalism would likely develop in a way that encouraged a proletariat organized collectively for its own goals to develop: the accumulation of surplus value as more means of production by the capitalists would allow them to become more and more powerful, encouraging overt class conflict. If this is not counteracted by increasing political and economic organization by workers, it would inevitably cause an extreme polarization of the classes, encouraging the revolution that would destroy capitalism itself.

The revolution would lead to a socialist society in which the proletariat controlled the state, that is, "the dictatorship of the proletariat". The original meaning of this term was a workers' democracy, not a dictatorship in the modern sense of the word. For Marx, democracy under capitalism is a bourgeois dictatorship.

Even after a revolution, the two classes would struggle, but eventually the struggle would recede and the classes dissolve. As class boundaries broke down, the state apparatus would wither away. According to Marx, the main task of any state apparatus is to uphold the power of the ruling class; but without any classes there would be no need for a state. That would lead to the classless, stateless communist society.

Marx noted that other classes existed, but said that as time (and capitalism) moved forward, these other classes would disappear, and things would become stratified until only two classes remained, which would become more and more polarized as time went on. Other classes are: 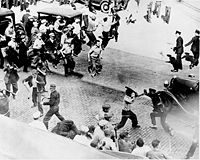 According to Michel Foucault, in the 19th century the essentialist notion of the "race" was incorporated by racists, biologists, and eugenicists, who gave it the modern sense of "biological race" which was then integrated to "state racism". On the other hand, Marxists transformed the notions of the "race" and the "race struggle" into the concept of "class struggle". In a letter to Friedrich Engels in 1882 Karl Marx wrote: You know very well where we found our idea of class struggle; we found it in the work of the French historians who talked about the race struggle.[3] For Foucault, the theme of social war provides overriding principle that connects class and race struggle.[4]

Moses Hess, an important theoretician of the early socialist movement, in his "Epilogue" to "Rome and Jerusalem" argued that "the race struggle is primary, the class struggle secondary... With the cessation of race antagonism, the class struggle will also come to a standstill. The equalization of all classes of society will necessarily follow the emancipation of all the races, for it will ultimately become a scientific question of social economics."[5]

In modern times, emerging schools of thought in the U.S. and other countries hold the opposite to be true. That the race struggle is less important, since the primary struggle is that of class since labor of all races face the same problems and injustices. The main example given is the United States, which has the most politically weak working class of any developed nation, where race is held as a distraction that has kept labor divided and unorganized.[6]

Social commentators, historians and socialist theorists had commented on class struggle for some time before Marx, as well as the connection between class struggle, property, and law: Augustin Thierry[7],François Guizot, François-Auguste Mignet and Adolphe Thiers. The Physiocrats, David Ricardo, and after Marx, Henry George noted the inelastic supply of land and argued that this created certain privileges (economic rent) for landowners.

Proudhon, in What is Property? (1840) states that "certain classes do not relish investigation into the pretended titles to property, and its fabulous and perhaps scandalous history."[8]

Fascists have often opposed class struggle and instead have attempted to appeal to the working class while promising to preserve the existing social classes and have proposed an alternative concept known as class collaboration.

Riots with a basically nationalist background are not included.