Infectious mononucleosis (IM; also known as EBV infectious mononucleosis or glandular fever or Pfeiffer's disease or Filatov's disease[1] and sometimes colloquially as the kissing disease from its oral transmission or simply as mono in North America and as glandular fever in other English-speaking countries) is an infectious, widespread viral disease caused by the Epstein–Barr virus (EBV), one type of herpes virus, to which more than 90% of adults have been exposed.[2] Occasionally, the symptoms can recur at a later period.[3] Most people are exposed to the virus as children, when the disease produces no noticeable symptoms or only flu-like symptoms. In developing countries, people are exposed to the virus in early childhood more often than in developed countries. As a result, the disease in its observable form is more common in developed countries. It is most common among adolescents and young adults.[4]

Especially in adolescents and young adults, the disease is characterized by fever, sore throat and fatigue, along with several other possible signs and symptoms. It is primarily diagnosed by observation of symptoms, but suspicion can be confirmed by several diagnostic tests.

The syndrome was described as an infectious process by Nil Filatov in 1887 and independently by Emil Pfeiffer in 1889.[5][6][1] 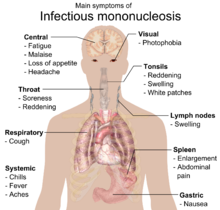 The classical symptoms of mononucleosis are a sore throat, fever, fatigue, some suffers are known to crave sugars in the form of fruits or starchy carbohydrated such as Pasta or potatoes malaise, pharyngeal inflammation, vomiting, petechiae and loss of appetite. Common signs include lymphadenopathy (enlarged lymph nodes), splenomegaly (enlarged spleen), hepatitis (refers to inflammation of hepatocytes—cells in the liver) and hemolysis (the bursting of red blood cells). Often, if symptoms are not apparent in the first two days of possible viral infection, then mononucleosis is not present. Older adults are less likely to have a sore throat or lymphadenopathy, but are instead more likely to present with hepatomegaly (enlargement of the liver) and jaundice. Rarer signs and symptoms include thrombocytopenia (lower levels of platelets), with or without pancytopenia (lower levels of all types of blood cells), splenic rupture, splenic hemorrhage, upper airway obstruction, pericarditis and pneumonitis. Another rare manifestation of mononucleosis is erythema multiforme.[10][11]

Mononucleosis is sometimes accompanied by secondary cold agglutinin disease—an autoimmune disease in which abnormal circulating antibodies directed against red blood cells can lead to a form of autoimmune hemolytic anemia. The cold agglutinin detected is of anti-i specificity.[12][13] Patients with infectious mononucleosis are sometimes misdiagnosed with a streptococcal pharyngitis (because of the classical clinical triad of fever, pharyngitis and adenopathy) and are given antibiotics such as ampicillin or amoxicillin as treatment. Some studies indicate that approximately 80–90% of patients with acute Epstein–Barr virus infection treated with such antibiotics develop a red, diffuse rash.[14]

The infection is spread via saliva and has an incubation period of 4–7 weeks.[17] Symptoms usually persist for 2–3 weeks,[18] but fatigue is often more prolonged.[4]

How long someone with the virus stays contagious after symptoms are gone is uncertain, but it is thought that the most contagious period lasts about 6 weeks after the onset of symptoms. Some studies indicate that a person can spread the infection for many months after the symptoms are completely gone, one particular study indicating as long as 18 months.[19]

The virus replicates first within epithelial cells in the pharynx (which causes pharyngitis, or sore throat), and later primarily within B cells (which are invaded via their CD21). The host immune response involves cytotoxic (CD8-positive) T cells against infected B lymphocytes, resulting in enlarged atypical lymphocytes (Downey cells).[20][21]

When the infection is acute (recent onset, instead of chronic), heterophile antibodies are produced.[11] 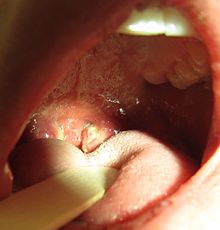 Exudative pharyngitis in a person with infectious mononucleosis 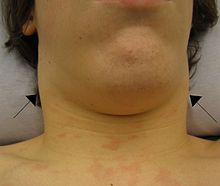 Cervical lymphadenopathy in someone with infectious mononucleosis

The most commonly used diagnostic criterion is the presence of 50% lymphocytes with at least 10% atypical lymphocytes (large, irregular nuclei),[10] while the person also has fever, pharyngitis and adenopathy. Furthermore, it should be confirmed by a serological test.[11] The atypical lymphocytes resembled monocytes when they were first discovered, thus the term "mononucleosis" was coined. Diagnostic tests are used to confirm infectious mononucleosis but the disease should be suspected from symptoms prior to the results from hematology.[22] These criteria are specific; however, they are not particularly sensitive and are more useful for research than for clinical use. Only half the patients presenting with the symptoms held by mononucleosis and a positive heterophile antibody test (monospot test) meet the entire criteria. One key procedure is to differentiate between infectious mononucleosis and mononucleosis-like symptoms.

A fibrin ring granuloma may be present.

Diagnosis of acute infectious mononucleosis should also take into consideration acute cytomegalovirus infection and Toxoplasma gondii infections. These diseases are clinically very similar by their signs and symptoms. Because their management is much the same it is not always helpful, or possible, to distinguish between EBV mononucleosis and cytomegalovirus infection. However, in pregnant women, differentiation of mononucleosis from toxoplasmosis is associated with significant consequences for the fetus.

Acute HIV infection can mimic signs similar to those of infectious mononucleosis and tests should be performed for pregnant women for the same reason as toxoplasmosis.[11]

Other conditions from which to distinguish infectious mononucleosis include leukemia, tonsillitis, diphtheria, common cold and influenza (the flu).[10]

Infectious mononucleosis is generally self-limiting and only symptomatic and/or supportive treatments are used.[23] Rest is recommended during the acute phase of the infection, but activity should[citation needed] be resumed once acute symptoms have resolved. Nevertheless, heavy physical activity and contact sports should be avoided to mitigate the risk of splenic rupture, for at least one month following initial infection or splenomegaly has resolved, as determined by a treating physician.[8]

In terms of pharmacotherapies, non-steroidal anti-inflammatory drugs (NSAIDs) like ibuprofen may be used to reduce fever and pain. Prednisone, a corticosteroid, is commonly used as an anti-inflammatory to reduce symptoms of pharyngeal pain, odynophagia, or enlarged tonsils, although its use remains controversial due to the rather limited benefit and the potential of side effects.[24][25] Intravenous corticosteroids, usually hydrocortisone or dexamethasone, are not recommended for routine use[26] but may be useful if there is a risk of airway obstruction, severe thrombocytopenia, or hemolytic anemia.[27][28] There is little evidence to support the use of aciclovir, although it may reduce initial viral shedding.[29] However, the antiviral drug valacyclovir has recently been shown to lower or eliminate the presence of the Epstein–Barr virus in subjects afflicted with acute mononucleosis, leading to a significant decrease in the severity of symptoms.[30][31] Although antivirals are not recommended for patients presenting with simple infectious mononucleosis, they may be useful (in conjunction with steroids) in the management of patients with severe EBV manifestations, such as EBV meningitis, peripheral neuritis, hepatitis, or hematologic complications.[32] Antibiotics are not used as they are ineffective against viral infections. The antibiotics ampicillin and later the related amoxicillin[33] are relatively contraindicated in the case of any coinciding bacterial infections during mononucleosis because their use precipitates a non-allergic rash close to 99% of the time.[34]

In a small percentage of cases, mononucleosis infection is complicated by co-infection with streptococcal infection in the throat and tonsils (strep throat). Penicillin or other antibiotics (with the exception of the two mentioned above) should be administered to treat the strep throat. Opioid analgesics are also relatively contraindicated due to risk of respiratory depression.[28]

Serious complications are uncommon, occurring in less than 5% of cases:[35][36]

Once the acute symptoms of an initial infection disappear, they often do not return. But once infected, the patient carries the virus for the rest of his or her life. The virus typically lives dormantly in B lymphocytes. Independent infections of mononucleosis may be contracted multiple times, regardless of whether the patient is already carrying the virus dormantly. Periodically, the virus can reactivate, during which time the patient is again infectious, but usually without any symptoms of illness.[3] Usually, a patient has few if any further symptoms or problems from the latent B lymphocyte infection. However, in susceptible hosts under the appropriate environmental stressors the virus can reactivate and cause vague physical symptoms (or may be subclinical), and during this phase the virus can spread to others. Similar reactivation or chronic subclinical viral activity in susceptible hosts may trigger multiple host autoimmune diseases, such as systemic lupus erythematosus, rheumatoid arthritis, Sjogren's syndrome, antiphospholipid antibody syndrome, and multiple sclerosis. Such chronic immunologic stimulation may also trigger multiple type of cancers, particularly lymphoma—strongest cancer associations with EBV are nasopharyngeal carcinomas, Burkitt's lymphoma, and Hodgkin's lymphoma. EBV's potential to trigger such a wide range of autoimmune diseases and cancers probably relates to its primary infection of B lymphocytes (the primary antibody-producing cell of the immune system) and ability to alter both lymphocyte proliferation and lymphocyte antibody production.[3][38][39]