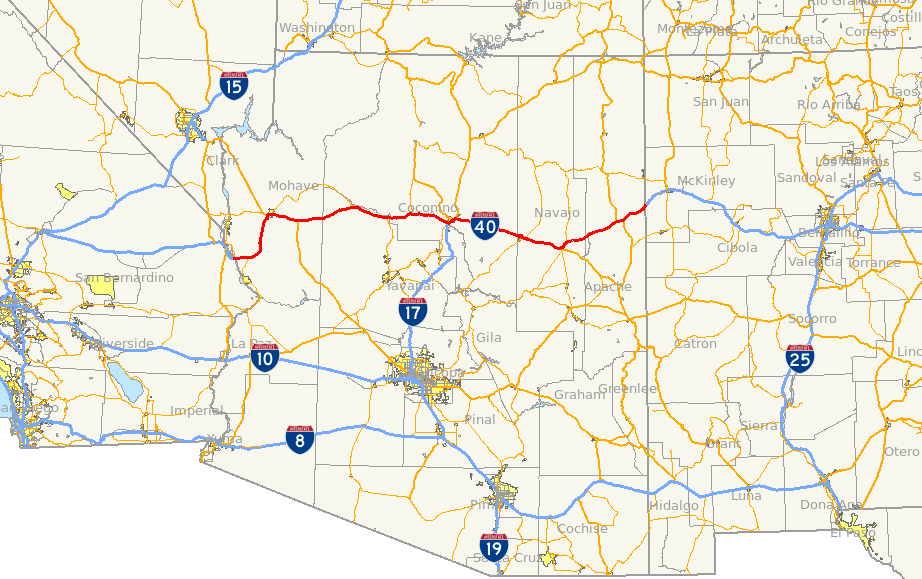 section=
length_mi=359.11
length_round=2
length_ref=
(I-40) is an east-west that has a convert|359.11|mi|km|2|sing=on section in the of connecting sections in to . It enters Arizona from the west at a crossing of the southwest of Kingman. It travels eastward across the northern portion of the state connecting the cities of Kingman, Williams, Flagstaff and Holbrook. I-40 continues into New Mexico, heading to Albuquerque. The highway has major junctions with U.S. Route 93 (US 93) in Kingman, the main highway connecting Phoenix and , and I-17 in Flagstaff, the Interstate linking Phoenix and Flagstaff.

For the majority of its routing through Arizona, I-40 follows the historic alignment of U.S. Route 66. The lone exception is a stretch between Kingman and Ash Fork where US 66 took a more northerly, less direct route that is now State Route 66. Construction of I-40 was ongoing in the 1960s and 1970s and reached completion in 1984. With the completion of I-40 in 1984, the entire routing of US 66 had been bypassed by Interstate Highways which led to its decertification a year later in 1985.

I-40 enters Arizona from California at a crossing of the at Topock in Mohave County. It heads east from Topock and begins to curve towards the north at Franconia and completes the curve to the north at Yucca. The Interstate continues to head north until it reach Kingman. In Kingman, I-40 has a junction with US 93 at exit 48. US 93 heads towards the northwest from this junction to and Las Vegas. US 93 south begins to run concurrently with I-40 as they both head east through Kingman. The two separate at exit 71 as US 93 heads towards the south towards Phoenix while I-40 heads east towards Flagstaff. I-40 continues towards the east, passing through the towns of Seligman, Ash Fork and Williams. At exit 165 in Williams, SR 64 heads north towards the . I-40 continues to the east to Flagstaff, where it has a junction with I-17 at exit 195. I-17 heads south from the interchange with I-40 to Phoenix.

Before the U.S. Highways

The routing of a road near the current corridor of I-40 in Arizona was first surveyed and built between 1857 and 1859. Lt. and his soldiers built the road along the 35th parallel that would come to be known as the from to the to serve as a military wagon road. The road was a popular route for immigrants during the 1860s and 1870s until the was built across northern Arizona in the 1880s. In the early 1900s, the road became part of the , a transcontinental route from to , and the , an auto trail linking the national parks of the west.

In the 1920s, as a nationwide system of highways called the was being developed, the route through was given the designation of U.S. Route 60. This designation was controversial since designations that are multiples of 10 are assigned to transcontinental east-west routes and this route was a diagonal route from Chicago to Los Angeles. As a compromise to states east of Chicago that felt US 60 should go through their state, a different route was given the number 60, while the route from Chicago to Los Angeles was given the number 66. [cite web|title=From Names to Numbers: The Origins of the U.S. Numbered Highway System|author=Weingroff, Richard|url=http://www.fhwa.dot.gov/infrastructure/numbers.htm|accessdate=2008-04-23|publisher=] By 1927, the routing of US 66 through Arizona had been laid out, but none of it had been paved yet. [cite map|publisher=|year=1927|url=http://www.arizonaroads.com/maps/index.html|title=Auto Road Map of Arizona and New Mexico|accessdate=2008-04-23] By 1935, nearly the entire route had been paved, with the lone exceptions being a short stretch northeast of Valentine and a stretch between Peach Springs and Seligman. [cite map|publisher=Arizona State Highway Department|year=1935|url=http://www.arizonaroads.com/maps/index.html|title=Road Map of Arizona|accessdate=2008-04-23] By 1938, the entire route in Arizona had been paved. [cite map|publisher=|year=1938|url=http://www.arizonaroads.com/maps/index.html|title=Auto Road Map of Arizona and New Mexico|accessdate=2008-04-23] In 1953, US 66 was realigned between the California border and Kingman to an alignment to the southeast to avoid the mountain curves and grades of the original alignment. By 1961, several sections of the highway had been expanded to a four-lane divided highway in anticipation of the coming Interstate Highway. Four-lane sections included a section near Ash Fork, another section east of Winslow and a section east of Holbrook near the Petrified Forest National Monument. [cite map|publisher=|year=1961|url=http://www.arizonaroads.com/maps/index.html|title=Road Map of Arizona|accessdate=2008-04-23]

In Flagstaff, several different alternatives were considered as a potential routing of the new Interstate through the area. The alternatives consisted of a routing north of downtown, south of downtown, through downtown along the Sante Fe railroad right-of-way near the alignment of US 66, and a more elaborate alternative of a routing above downtown on a long overpass. In January of 1959, the Flagstaff Chamber of Commerce recommended to the Bureau of Public Roads that the route south of downtown be used which was approved by the Flagstaff City Council and the Board of Supervisors for Coconino County. This recommended was accepted and would become the planned routing of I-40 in Flagstaff.

In 1965, the routing of I-40 west of Kingman was being reconsidered from the planned route through to a route to the north passing through Searchlight in southern Nevada and connecting with I-15 further north of its present connection with I-15. The rationale for the proposal was that it would be an overall shorter route and would cost must less to construct. [cite news|title=Needles Future at Stake in Routing of Highway 40|publisher=|location=|date=November 4, 1965] The proposal was met with stiff opposition including all four s from California and Arizona sending the letters requesting that the routing through Needles be retained. [cite news|publisher=|title=Interstate 40 Routing Plea Made|page=A10|date=September 9, 1965] This proposal was eventually abandoned in 1966 and the routing through Needles was kept. [cite news|publisher=|title=Needles Wins Its Fight to Keep Interstate 40|date=February 3, 1966|page=3]

The construction of the convert|360|mi|km|0|sing=on route of I-40 across Arizona took nearly 25 years to complete with the last segment being completed in 1984, much longer than the ambitious goal of finishing by 1972. By the end of 1960, convert|15|mi|km|0 had been completed with an additional convert|23|mi|km|0 miles being worked on. [cite news|publisher=|author=Lesure, Thomas|date=December 11, 1960|title=Arizona Highway Dream Comes True|page=XX20] In 1964, construction was still on schedule with convert|58|mi|km|0 complete and an additional convert|71|mi|km|0 under construction. Funding was becoming an issue at this time as the state lacked the available funds to stay on pace with a 1972 completion goal. [cite news|title=I-40 Work On Schedule State Says|publisher=|page=10|date=September 22, 1964] By 1967, Arizona had completed approximately half of the highway with convert|155.3|mi|km|1 complete and another convert|82.4|mi|km|0 under construction. [cite news|title=High Cost Highways:Funds Tie Ups Interstate String|publisher=|author=Lederer, Edith|date=September 22, 1967] In 1968, the bypass around Flagstaff was complete with three interchanges, two at each end of where US 66 split off from I-40 to enter the city and one at the I-17 interchange. An additional interchange at Butler Avenue was completed a year later. [cite news|title=Butler Busy Center|publisher=|date=October 21, 1971, page=B7] One of the big improvements of I-40 over US 66 was the construction of the segment between Kingman and Ash Fork. The convert|94|mi|km|0|sing=on section is a more direct route between the two cities and travels as far as convert|20|mi|km|0 south of the US 66 alignment. Construction of the $69.1 million segment was also to be a much safer route as the US 66 alignment had one of the highest fatality rates of any section of highway in Arizona. This section of the Interstate was complete in 1975. [cite news|title=Kingman, Ash Fork Cutoff Progressing|publisher=Arizona Daily Sun|date=March 2, 1971|page=9] Construction of the $7.7 million bypass around Winslow began in 1977. [cite news|title=Sundt Gets Contract For Winslow Bypass|page=3|date=December 4, 1977] I-40 was completed in Arizona in 1984, with the completion of a convert|6|mi|km|0 section in Williams. [cite news|title=It's the End of the Road for Route 66|publisher=|date=October 14, 1984|page=A17] This was also the last section of US 66 to be bypassed by the Interstate, which led to it being decertified by the (AASHTO) the following year. [cite news|title=You Can No Longer Get Kicks on Route 66|publisher=|location=|page=1A|date=June 29, 1985]