Diet Coke (also known as 'Diet Coca-Cola', Coca-Cola light or Coke Light) is a sugar-free soft drink produced and distributed by The Coca-Cola Company. It was first introduced in the United States on August 9, 1982,[1] as the first new brand since 1886 to use the Coca-Cola trademark. The product quickly overtook the soft drink Tab in sales.

Diet Coke was sweetened with aspartame after the sweetener became available in the United States in 1983;[2] to save money, this was originally in a blend with saccharin. After Diet Rite cola advertised its 100 percent use of aspartame, and the manufacturer of NutraSweet (then, G.D. Searle & Company) warned that the NutraSweet trademark would not be made available to a blend of sweeteners, Coca-Cola switched the formula to 100 percent NutraSweet. Diet Coke from fountain dispensers still contains some saccharin to extend shelf life.[3]

In other countries, in which cyclamates are not banned (as they were in the U.S. and the United Kingdom in 1970[citation needed]), Diet Coke or Coca-Cola Light may be sweetened with a blend containing cyclamates, aspartame, and acesulfame potassium.

In 2005, under pressure from retailer Wal-Mart (which was impressed with the popularity of Splenda sweetener), the company released a new formulation called "Diet Coke sweetened with Splenda".[4] Sucralose and acesulfame potassium replace aspartame in this version. Early sales were weaker than anticipated; however, Coca-Cola did little advertising for the brand, investing money and advertising in Coca-Cola Zero instead. By late 2009, some distributors had stopped supplying Diet Coke sweetened with Splenda.

Diet Coke does not use a modified form of the Coca-Cola recipe, but instead an entirely different formula. The controversial New Coke, introduced in 1985, used a version of the Diet Coke recipe that contained high fructose corn syrup and had a slightly different balance of ingredients. In 2004, Coca-Cola introduced Coca-Cola C2, which it claims tastes much closer to Coca-Cola but contains half the carbohydrates. In 2005, the company introduced Coca-Cola Zero, a sugar-free variation of regular Coca-Cola.

When Tab was released in 1963, the Coca-Cola Company refused to release a diet soda with the Coca-Cola name, fearing that its flagship brand might suffer. Its rival Pepsi had no such qualms, and after the long-term success of its sugar-free Diet Pepsi (launched in 1964) became clear, Coca-Cola decided to launch a competing sugar-free brand under the Coca-Cola name, which could be marketed more extensively than the more anonymous Tab.

Diet Coke and Diet Pepsi have capitalized on the markets of people who require low sugar regimens, such as diabetics and people concerned with calorie intake. In the UK, a 330 ml can of Diet Coke contains around 1.3 calories (5 kilojoules) compared to 142 calories (595 kJ) for a regular can of Coca-Cola. 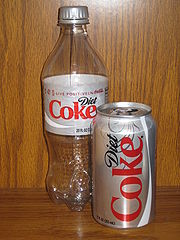 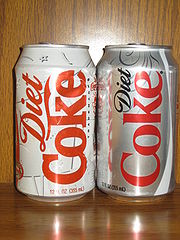 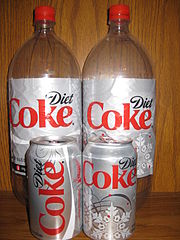 Diet Coke's Holiday 2008 Edition bottle and can compared to regular ones.

The current Diet Coke logo was adopted in 2007

The most commonly distributed version of Diet Coke (and majority of beverages using artificial sweeteners) relies on aspartame, which has been labeled as a toxic substance by internet rumors[9] and sensational media coverage.[10] However, aspartame is one of the most intensively scrutinized food additives and has been deemed safe by the American Medical Association, [11] the World Health Organization (WHO) and over 100 food regulatory agencies over the world.[12] See also soft drink controversy and health concerns.

Coca-Cola has now released Diet Coke sweetened with sucralose (also known as Splenda), although it is not as common.