Michael Reid (19 January 1940 – 29 July 2007) was an English comedian, actor, author and occasional television presenter from Hackney in east London, who is best remembered for playing the role of Frank Butcher in EastEnders and hosting the popular children's TV show Runaround. He was noted for his gravelly voice and strong Cockney accent.

Michael Reid was born in Hackney, East London in 1940 during World War II, and the Blitz bombings of Central London caused him and his family to relocate to Tottenham, North London, where he attended Rowland Hill School.

In 1958, he married his first wife, they had a daughter, Jane Hall.[1] They divorced in 1967, after which he married his longtime live-in partner Shirley (née Collins) in 1971; they had two sons, Michael (born 1962) and Mark Edward (1965–1990). Shirley already had a son James (known as Jimmy) and a daughter, Angela (who in 2008 the press claimed to be a British National Party activist). In December 1985, his son Mark, a schizophrenic, accidentally shot dead his 17 year old friend, for which he was sent to prison.[1] Mark fathered twins, a son and daughter, and committed suicide aged 24 in Colchester, Essex, by setting himself on fire. Shortly after his son's death, Reid's granddaughter Kirsty Anne S. (1990-1990) - Mark's daughter - died in her cot in Colchester,[2] aged six months.

Reid moved to a villa in Marbella, Spain so he could live close to a golf course which would enable him to pursue his passion of playing golf three to four times each week.

Reid was known to be opposed to plans to introduce blasphemy laws, for the effect this would have on satire, comedy and free speech.[3]

Reid was good friends with fellow actor and stand up comedian Freddie Starr; together they introduced their sometime-bodyguard, the bareknuckle fighter Lenny McLean, to acting. McLean went on to star in Lock, Stock and Two Smoking Barrels.[citation needed]

Reid's first work in entertainment was as a stand-up comedian in clubs and aboard cruise liners in the early 1960s. He then became an extra playing uncredited roles in television series such as Doctor Who (in the story The War Machines), The Saint and Department S. He also worked as a stuntman for films such as Casino Royale (1967) and The Dirty Dozen (1967).

He then became one of the original stars of The Comedians, a popular TV series of the 1970s produced by Johnnie Hamp for the Manchester-based Granada Television, which consisted entirely of short slots by mature stand-up comedians. Being the only obviously London comic in a line-up made up predominately of Northern English and Northern Irish comedians, Reid stood out. As a comedian, Reid's well-known catchphrases included 'Terrific' (pronounced with the emphasis on each syllable), 'Turn It In' and 'Move Yer Arris'. 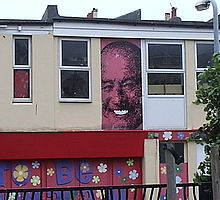 Mike Reid's face on the façade of a shop in Brighton

He capitalised on his initial success with a one-off hit record, a novelty version of The Ugly Duckling recorded on PYE records. In 1975 it reached number 10 in the BBC Top 50 Singles Chart. In 1975 he also became the host of the ITV children's TV quiz show Runaround, fondly remembered for its incomprehensible rules and the incongruity of Reid as presenter. Runaround ended in 1981.

In 1987 he joined the cast of the popular BBC television soap opera EastEnders as Frank Butcher for which he gained much popularity over the years. He initially joined the series as a semi-regular character, first appeared in September of that year, but was so popular that during 1988 he became a full time cast member as his character became landlord of the Queen Vic pub, buying it from Den Watts (Leslie Grantham) during 1988.

The part of Butcher earned Reid the public persona of being pessimistic that he enjoyed acting against, for instance in television adverts for the soft drink Oasis. His character was involved in many popular storylines over the years and the most famous of these storylines was his character's long turbulent relationship with Pat Wicks (played by Pam St. Clement) and later with Peggy Mitchell played by (Barbara Windsor).

In April 1994, by which time the character of Frank Butcher was one of most popular and iconic on British television, Reid took a long break from the show due to stress from acting out a depression storyline for the show. Later that same year he starred alongside other fellow EastEnders actors Barbara Windsor and John Altman in his classic adult pantomime Pussy in Boots a spin off of Puss in Boots where Reid played the main role of 'Big Dick'.[4] In 1994 he provided a voiceover for one of the cows in the Anchor Butter adverts. The advert was called Anchor: Never Seen Anything Like It.[5]

His return to EastEnders was aired on Christmas Day 1995. He was initially reintroduced as a recurring character and after several brief stints on the show, he returned as a full time character in May 1998. His character was part of many big storylines over the next two years and in May 2000 he announced that he would be leaving the soap for good due to exhaustion from the long filming schedules.[6] He was persuaded to stay on the show for a further five months to give his character a dramatic exit. His departure was aired on 2 November 2000 when he famously departed after his affair with ex-wife Pat Evans was discovered by his current wife Peggy Mitchell. That same year he appeared in the popular British gangster film Snatch playing mob boss Doug "The Head" Denovitz. He went on to appear in several low-budget British films over the next few years such as Hey Mr DJ (2005), Moussakka and Chips (2005) as well as a Spanish film titled Oh Marbella (2003).

He also made brief returns to EastEnders in late January 2002, a spin-off special episode titled "Perfectly Frank" in 2003 and made his final comeback to EastEnders in early December 2005, for a week-long stint. In early 2006, he appeared on The Paul O'Grady Show and made it clear that he had no interest in any possible future re-appearances in EastEnders, and later that year he rejected another offer to return to the series.

He was semi-retired from show business by this time, and lived in a villa in Spain. He returned to acting in early 2007 and appeared in two episodes of the long-running ITV police drama series The Bill where he played the part of corrupt businessman Brian Stevens. This was his last broadcast television appearance at that time, though he had filmed a reality series for ITV entitled The Baron before his death; the network was undecided as to whether it would be aired[7] but the programme started airing on 24 April 2008 on ITV1. Reid was the eventual winner, facing off against Suzanne Shaw after the departure of the other contestant Malcolm McLaren. Reid was thus bestowed with the title of Baron of Troup, a genuine and hereditary barony, though one conveying no privilege aside from the use of the title itself. Mike had also completed filming as a gangster in the independent British film Jack Says 4 days before his death. The film was released on DVD on 22 September 2008. His character, "The Guv'nor", also features in the Graphic Novel prequel Jack Said.

Throughout his life, Reid performed at many venues, but only a few were recorded for release on VHS and DVD. These titles are:

He also appeared in a pantomime entitled Pussy In Boots, an obvious pun to Puss In Boots, which starred Barbara Windsor. Mike recorded many cover versions of classic songs. In 2006, his version of Adriano Celentano's nonsense song Prisencolinensinainciusol has enjoyed a renaissance, spurred by a campaign group on the social networking site Facebook in 2010, primarily led by his granddaughter, Claire Louise Reid.

Reid died in Marbella, Spain on 29 July 2007, aged 67[8] from a suspected heart attack. Two weeks before he died, he had received a full medical examination and had been given a clean bill of health.[9] The 30 July 2007 EastEnders episode featured a dedication to him following the end credits.

He was cremated the following day at Chelmsford Crematorium, Essex.

In November 2007, just over three months after Reid's death, the BBC announced that his EastEnders character Frank Butcher would be killed off in April 2008. The week had been dubbed "Frank Week". In the EastEnders episode on 1 April 2008, Frank's funeral was held. Frank's children, Ricky, Diane and Janine also made a comeback.[12] In the episode in which Frank's funeral took place, Reid appeared in previous scenes which had aired years earlier, in flashbacks in Pat Butcher's head. He was also heard saying "Take care of yourself, babe", to Pat at the very end of the episode. The flashback of the words Frank had spoken were taken from the end of the last-ever scene Mike performed in, in EastEnders, which originally broadcast in December 2005.

It was later revealed that Reid owed £900,000 at the time of his death, which meant that creditors took all his money.[13]