The Order of Culture (文化勲章, Bunka kunshō?) is a Japanese order, established on February 11, 1937. The order has one class only, and may be awarded to men and women for contributions to Japan's art, literature or culture; recipients of the order also receive an annuity for life. The order is conferred by the Emperor of Japan in person on Culture Day (November 3) each year.

The Order of Culture and Persons of Cultural Merit function together in honoring contributions to the advancement and development of Japanese culture in a variety of fields such as academia, arts and others.[1] 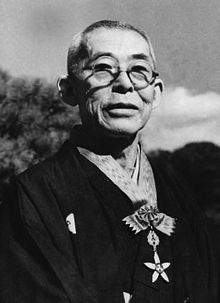 Kabuki actor Nakamura Kichiemon I was awarded the Order of Culture in 1951. He was the first kabuki performer to be accorded this honor.

The Emperor himself presents the honor at the award ceremony, which takes place at the Imperial Palace on the Day of Culture (November 3rd). Candidates for the Order of Culture are selected from the Persons of Cultural Merit by the Minister for Education, Science, Sports and Culture upon hearing views of all the members of the selection committee for the Persons of Cultural Merit. The Minister then recommends the candidates to the Prime Minister so that they can be decided by the Cabinet.[1]

Known to have declined the honor