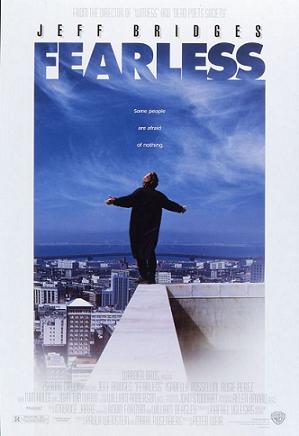 "Fearless" is a 1993 film directed by and written by from his novel of the same name. It was shot entirely in .

was nominated for an for her role as Carla Rodrigo. She lost to for "". Jeff Bridges role as Max Klein is widely regarded as one of the best performances of his career. The film's soundtrack features part of the first movement of 's Symphony No. 3, subtitled Symphony of Sorrowful Songs.

Max Klein is a survivor of a plane crash. Many die, including his business partner. The trauma transforms his entire life. He enters an altered state of consciousness; soon after the crash he even thinks he is dead, and begins rethinking life, death, God, and the afterlife. Existential questions start to preoccupy his life. He moves away from his wife, son, and friends but, encouraged by an aircraft company psychiatrist, he tries to break the depression and apathy of another survivor, Carla Rodrigo, who lost her baby son during the flight. Eventually Max's increasingly dramatic attempts at pushing the boundaries between life and death succeed in jolting Carla from her uncertain state. However, after parting company with Carla, Max remains preoccupied, which endangers his relationship with his wife and son. Max has another, more serious near-death experience after eating strawberries, to which he has a severe allergic reaction. He survives and (it is implied) he recovers his emotional connection to his family and the world.

The doomed flight in the movie bears many resemblances with the real-life crash landing of in 1989:
*The plane suffered a failure in the hydraulics system, following an engine explosion.
*The crew attempted an emergency landing, and many of the passengers and crew survived.
*A man receives media coverage for saving the life of a small child who is supposed to be a real-life survivor. This child, in real life was . In real life, the man was Lt. Colonel Dennis Nielsen.
*The plane skids into a cornfield.