The Aerial Lift Bridge (earlier known as the Aerial Bridge or Aerial Ferry Bridge) is a major landmark in the port city of Duluth, Minnesota. The span is a vertical lift bridge, which is rather uncommon, but it began life as an extremely rare transporter bridge—the first of just two such bridges ever constructed in the United States.[2] Originally built in 1905, the bridge was upgraded in 1929–30 to the current lifting design and continues to operate today. The bridge was added to the National Register of Historic Places on May 22, 1973. A maritime museum maintained by the United States Army Corps of Engineers exists near the site of the bridge. 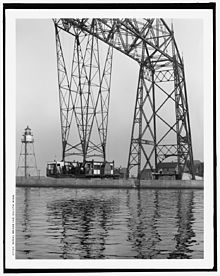 The bridge spans a small canal which was put through the thin but long sand spit named Minnesota Point (commonly referred to as Park Point by locals) in 1870–71. The natural mouth of the St. Louis River is about seven miles (11 km) farther southeast, and is split between Minnesota and Wisconsin. Creating this gap in the tiny peninsula meant that residents who lived on the new island needed to have a way to get across. Several different transportation methods were tried, though they were complicated by the weather. Ferries could work in the summer, but ice caused problems in colder months. A swinging footbridge was used, but was considered rather rickety and unsafe.

In 1892, a contest was held to find a solution. The winning design came from John Alexander Low Waddell, who drew up plans for a high-rise vertical lift bridge. The city of Duluth was eager to build the bridge, which would have been about 130 feet (40 m) wide. However, the War Department objected to the design, and the project was canceled before it could be built. Waddell's design went on to be built in Chicago, Illinois as the slightly larger South Halsted Street Bridge (removed in 1932).[3][4][5]

New plans were later drawn up for a structure that would ferry people from one side to the other. This type of span, which is known variously as an aerial transfer, ferry, or transporter bridge, had first been demonstrated in Bilbao's Vizcaya Bridge in 1893 and one in France in 1898. Duluth's bridge was inspired by the one in France, though the actual construction is quite different. The architect was a city engineer, Thomas McGilvray.[1] 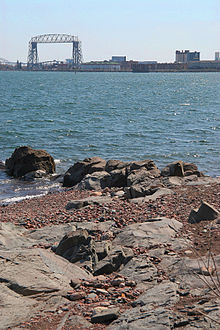 When it was completed in 1905, the Aerial Bridge's gondola had a capacity of 60 short tons (54 tonne) and could carry 350 people plus wagons, streetcars, or automobiles. A trip across the canal took about one minute, and the ferry car moved across once every five minutes during busy times of the day.[6] However, a growing population on Minnesota Point, a greater demand for cars, and an increase in tourism soon meant that the bridge's capacity was being stretched to the limit.

A remodeling was planned that would remove the gondola and incorporate a lifting platform into the structure. Ironically, the firm finally commissioned with designing the new bridge was the descendant of Waddell's company. The new design, which closely resembles the 1892 concept, is attributed to C.A.P. Turner. Reconstruction began in 1929.[1] In order to ensure that tall ships could still pass under the bridge, the top span had to be raised to accommodate the new deck when raised. The support columns on either side were also modified so that they could hold new counterweights to balance the weight of the lifting portion. The new bridge first lifted for a vessel on March 29, 1930.[6]

The bridge can be raised to its full height in about 3 minutes, and goes up 25 to 30 times daily during busy parts of the shipping season. The span is about 390 feet, or 120 meters. As ships pass, there is a customary horn-blowing sequence which is copied back. Long-short-long-short means to raise the bridge, and Long-short-short is a friendly salute.

The canal that runs under the bridge has quite a story of its own. Construction began in 1870, but became a contentious issue with the neighboring port of Superior, Wisconsin. The city of Superior even went to federal court to halt the construction. An injunction to stop work sat waiting to be served one weekend in 1871, so an army of 50 volunteers was quickly dispatched by Duluth's administrators to the canal site so it could be completed before Monday rolled around. They succeeded in creating a 30 foot (9 m) wide channel, essentially making the injunction meaningless.

In 1888 Wilhelm Boeing, who owned 14 plots on either side of the canal, tried to stake a claim that he had the right to charge a toll to ships using the canal. In October 1889, he posted notices around the Twin Ports that a rope would be stretched across the canal and that all canal traffic would be stopped. It is unclear on whether he ever carried out his threat, however, the issue became moot when he died the following month in Detroit.[7] His son, William E. Boeing, went on to found the Boeing aircraft company.