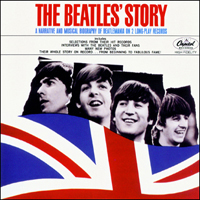 
"The Beatles' Story" is a documentary double featuring interviews, press conferences, and songs by the , released by Capitol in 1964, a time when demand for Beatles product was insatiable. The disc is unremarkable except for brief stereo excerpts of their 1964 Hollywood Bowl concert, which was unreleased until May 1977. Several voice overs dominate the rest of the record. The album entered the Billboard Top LP's chart on December 12th at number 97. On , 1965, the album reached its peak position at number seven, where it remained for four weeks before beginning its slide down the charts. "Cash Box" entered the album at number seven, whereas "Record World" showed the record peaking at number 13. Although not a million-seller, the album was certified gold, signifying sales in excess of one million dollars, in its first week; a very respectable showing, considering that the album was little more than an elaborately packaged documentary record.

In 1996, "The Beatles' Story" was prepared for release on (DAT), but when the format failed commercially, the plan was scrapped. This is one of the few American Beatles albums that has yet to be officially reissued on . (It was never issued in any format but .)