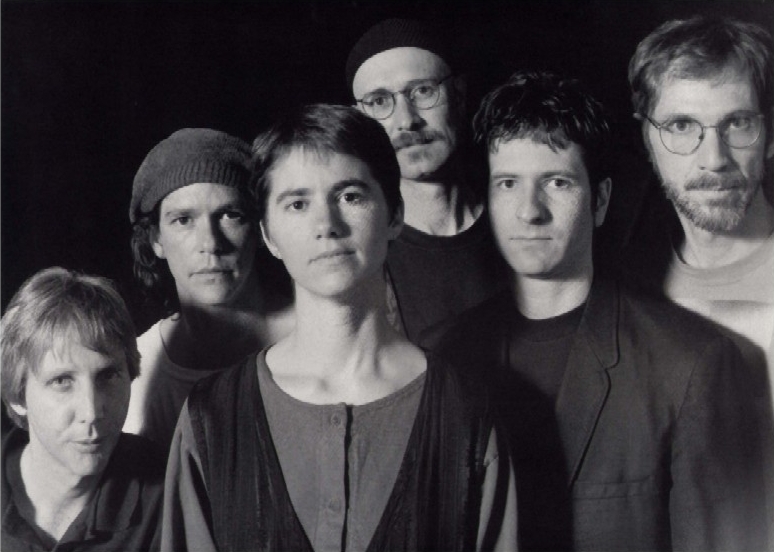 Thinking Plague was a rock group founded in 1982 by guitarist/composer, Mike Johnson, and bass guitarist/drummer, Bob Drake. Based in , the band was active on and off since 1982, taking on a number of musicians over the years. They made five studio albums between 1984 and 2003, and released one live album recorded at in 2000.

Their music is a mix of rock, folk, jazz and 20th-century classical music. remarked that "...Thinking Plague stand out as a shining example of avant-garde music blended with just enough rock for it to be called progressive rock..." [ cite web |url=http://www.generalrubric.com/thinkingplague/main.html |title=News |work=Thinking Plague homepage |accessdate=2007-06-19 ]

Mike Johnson and Bob Drake first met in 1978 and played in several s. They began experimenting with basement recordings in 1980 and by 1982 they had enough song material to attempt a few live performances. For these shows they enlisted the services of classically trained vocalist , on keyboards, and on drums. This ensemble became the first incarnation of Thinking Plague. They played at a few venues around Denver in 1983 but their complicated music was not well received and Johnson and Drake decided to make an album of their material instead.

With Bradford, Fleishman and Mark Fuller on drums the band worked on and off for almost a year recording their songs at a crude 8-track recording facility in the basement of an old called the Packing House Studios. Having limited funds they did all the tracking and mixing themselves, and released the album, "...A Thinking Plague" in 1984 on their own Endemic label. Only 500 LPs were pressed with each cover hand painted by Drake with spray-paint and a stencil. In spite of the small scale, low-tech quality of the release, a number of distributors, including and Wayside Music (Cuneiform Records) agreed to sell the album and it was well received by some critics

In 1985 Johnson and Drake began to record material for a new Thinking Plague album. The Packing House Studios had closed but they had access to a few "low budget" recording facilities in Denver. Having disbanded the "Packing House" group after their first album, Johnson and Drake recruited a new band: singer-song writer , drummer Mark Fuller and keyboardist Eric Moon. Disregarding, or ignorant of the proper "industry" way of doing things, Thinking Plague recorded their second album, "Moonsongs". The title track was a fifteen-and-a-half minute "tribal-pagan-environmental-anti-materialistic avant-rock ritual"

Riding on the success of their two albums, Thinking Plague performed a series of live shows in 1987 in Denver, opening for at one of them. Pianist/clarinetist joined the band for the live performances, but left in early 1988. Haugseth's brief stay did, however, establish the need for a woodwind/reed section in the band. Fuller and Moon had also left the band in late 1987, which prompted the acquisition of three new musicians: classical pianist, , bassist , and Mark Harris on clarinet, saxophones and flutes. Drake switched from bass guitar to drums.

Recording for a new album began in early 1988 in various studios, including a large rehearsal room in an old factory (referred to as the Yog Factory). Johnson and Lewis had collaborated on a collection of songs for the album, which featured several "new" instruments, including sampler, tabla, various n and Balinese percussion instruments, and a fiddle (courtesy Bob Drake). Ex-Henry Cow guitarist guested on one track, "Organism (version II)", the original version (also with Frith) having been released on Recommended Records' "RēR Records Quarterly Vol.2 No.4". Drake did all the production work and the album, "In This Life" was finished in mid-1988. At the time ex-Henry Cow drummer and Recommended Records founder, was on tour with Pere Ubu in Denver and Johnson gave Cutler a cassette tape of the new album. Cutler offered to release it on the Recommended label, and in September 1989, "In This Life" became the first US-made CD on the British label.

"In This Life" was widely distributed and began "gaining kudos from aficionados of avant rock from all around the world."

In Los Angeles, Drake met drummer of an avant-rock band, the and began working with Kerman's band. Kerman's interest in Thinking Plague led to him joining the Denver band. Drake and Lewis also agreed to "rejoin" (despite the distances) and with the other remaining members, Johnson, Harris and Hotle, Thinking Plague "reformed" in 1990. For the next few years the band worked intermittently at some long-distance rehearsals, performed in a few concerts and made some new recordings, after which all work was put on hold. During this period of dormancy Johnson toured across in 1995 with Drake, Kerman and the 5uu's, but upon returning to the United States the three agreed that reviving Thinking Plague again was not a practical option.

Johnson joined another local avant-rock band, in 1996, and suggested to its leader, accordionist and bassist that he join a new incarnation of Thinking Plague. Willey agreed and recommended as a singer. At much the same time, Kerman moved to Denver and rejoined the band. With existing members Harris and Hotle the new Thinking Plague began recording new material that Johnson had written. In early 1998 the finished tracks were sent to Drake (now living in ) for mixing and production, and the result was Thinking Plague's fourth album, "In Extremis", released in 1998 by Cuneiform Records.

"In Extremis" was rated the top album in 1998 by "Gnosis" [ cite web |url=http://gnosis2000.net/gnosearch.cgi |title=Top Rated Albums, 1998 |work=Gnosis |accessdate=2007-06-25 ] , and its success resulted in new concert appearances for the band. A new member, Matt Mitchell on keyboards was recruited to replace Hotle who had left after the making of "In Extremis", and Thinking Plague performed at the 1999 ProgDay Festival, followed by a tour of the eastern and mid-western United States. In June 2000 the band played at , a recording of which was mixed three years later by Drake and released as "Upon Both Your Houses" in 2004 by . In July 2000 the band toured France and .

After the concerts in Europe, Kerman left the band and was replaced by ex- drummer . Work began on a new album, "A History of Madness", which was released in September 2003 by Cuneiform Records. It was recorded over a period of two years, with half the band members flying into Denver from across the United States to add their contributions. "A History of Madness" was the first Thinking Plague album that Bob Drake did not produce; Johnson and , of the Brave New Audio studio where the album was recorded, did all the mixing.

Thinking Plague's name was created by the band's founders, Mike Johnson and Bob Drake. According to Johnson, "The idea was to say something about that sort of existential condition of being unable to stop thinking, analyzing, or otherwise intellectualizing, which causes one to be separated from 'things in themselves', as it were."