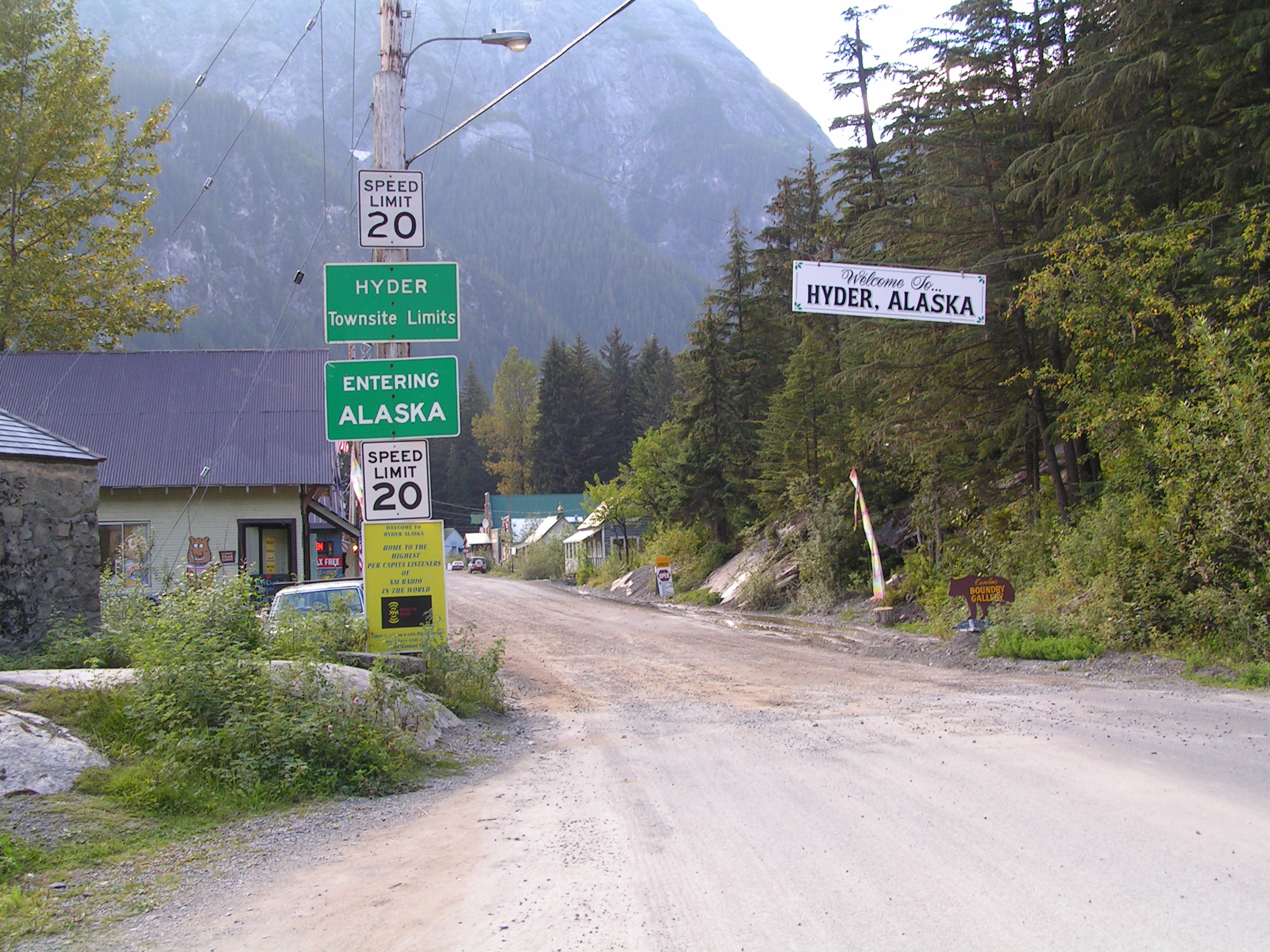 image_caption = The border between and Hyder, as seen from the Canadian side.
imagesize = 250px

Hyder is a (CDP) in Prince of Wales-Outer Ketchikan Census Area, , . At the 2000 census the population was 97.

Hyder is located at the head of the Portland Canal, a 115 km (70 mile) long fjord which forms a portion of the border between the United States and Canada at the southeastern edge of the . Hyder is 3 km (2 miles) from and 120 km (75 miles) from Ketchikan by air.

There were 47 households out of which 19.1% had children under the age of 18 living with them, 51.1% were married couples living together, 2.1% had a female householder with no husband present, and 44.7% were non-families. 40.4% of all households were made up of individuals and 6.4% had someone living alone who was 65 years of age or older. The average household size was 2.06 and the average family size was 2.81.

The , who lived around the , called the head of Portland Canal "Skam-A-Kounst," meaning "safe place", probably because it served them as a retreat from the harassment of the s on the coast. They travelled in the area seasonally to pick berries and hunt birds.

The area around the Portland Canal was explored in 1896 by Captain D.D. Gaillard of the United States Army Corps of Engineers.

In 1898, gold and silver lodes were discovered in the region, mainly on the Canadian side in the upper basin. The Stewart brothers, for whom the British Columbia town was named, arrived in 1902.

Hyder was originally called Portland City, after the canal. In 1914, when the United States Postal Service told residents that there were too many cities named Portland in the United States, it was renamed after Frederick Hyder, a Canadian mining engineer who envisioned a bright future for the area. Hyder was the only practical point of access to the silver mines in Canada, and the community became the port, supply point, and post office for miners by 1917. Hyder's boom years occurred between 1920 and 1930, when the Riverside Mine on United States side extracted gold, silver, copper, lead, zinc, and tungsten. The mine operated from 1924 until 1950.

In 1948 the old abandoned part of Hyder, which was built on pilings, was destroyed by fire. By 1956 all major mining had closed except for the Granduc Copper Mine on the Canadian side, which operated until 1984. Westmin Resources Ltd. currently operates the only remaining mine in the area, a gold and silver mine on the Canadian side.

Hyder is accessible by highway from , which connects with the British Columbia highway system. Hyder became popular with long distance motorcycle riders in 1998 when author Ron Ayres set a record of riding to the contiguous 48 states in six days. Ayres went on to add to the 48 state record by continuing on to Hyder, Alaska to establish a new 49-state record of 7 days, 0 hours and 20 minutes. Ayres named the new long distance ride the "48 Plus" and the 49-state ride has become very popular with members of the long distance motorcycle riding .

Hyder is also the location of the annual "Hyder-Seek" gathering of long-distance motorcyclists who travel from all over North America each Memorial Day weekend.

Hyder have some notoriety as the place where people become "Hyderized." Two of the town's bars issue certifications to patrons of being "Hyderized" if the patron consumes a shot of 150 proof (75% alcohol) Everclear.