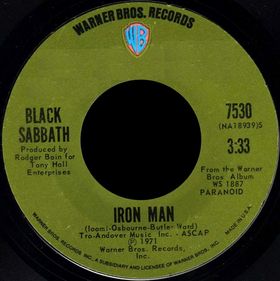 "Iron Man" is a song by British heavy metal band from their second studio album "Paranoid" released in 1970. It was later included on their initial greatest hits compilation "" (1976), as well as all subsequent greatest hits compilations. Many musical acts have recorded cover versions of the song, and the song is frequently used and referenced during sporting events and in television shows and films.

The title of the song was conceived by . Geezer Butler took to writing the lyrics around the title, but was careful not to make it about the comic book character so as to avoid a copyright infringement lawsuit. Thus making the song telling the story of a vengeful villain instead of a superhero. Nonetheless, instrumental sections of the song were used in the 2008 feature film "Iron Man" at the beginning of the credits, and in the television commercials.

Other releases and uses in pop culture

*There have been many re-releases of "Iron Man". It was also a B-side for the 1981 picture disc single "Paranoid".
* sampled "Iron Man" as a rap song in the late '80s on his album "".
* used elements of the song in the track "This Means War!!" (featuring Ozzy Osbourne as guest vocalist) on his "" album.
*Swedish band covered the song on their "" album.
* used the main much higher for their song "Sam Son of Man".
*Though the song is not related to the comic book character, it was used (without the lyrics, only the playback) in the closing credits of the 2008 movie "Iron Man". The song, with lyrics available, is the background music for the first level of the "Iron Man" game.
*In the episode '' the distinctive riff from Iron Man is quickly heard when Giant Bender flies to Earth.
*In the movie "", Dewey Finn () uses "Iron Man" as the first song to teach his class, in particular to guitarist Zack Mooneyham (Joey Gaydos Jr.).
*"Iron Man" is a playable song in the game "".
*"Iron Man" shows up in the end of a "" episode when George requests a mariachi band to play it.
* wrote the parody "I Am Santa Claus". ["I Am Santa Claus" [http://www.bobrivers.com/player/player.asp?atype=tunes&ID=653 (audio)] ; [http://youtube.com/watch?v=CRW2poUfJ34 (video)] ]
*A remix of the song was used for the soundtrack of .
*In 1983, a new tag team in , the , used this song as their entrance music. *The beginning of the song was featured in commercials for the in 2007.
*In an episode of "", Nelson adlibs the riff as a campaign song for school president. His version goes "I am Iron Man, nah nah nah nah nah nah nah, vote for me!"
*In the episode "The Deer Hunters", Drella starts playing "Iron Man" on her harp during a function at the Independence Inn; Lorelai catches her out, telling her "No , no , no Boston, and no Queen."
*In the episode "A bill is broken" The song's beginning is played during a flashback of Bill at a big foot-ball game.
* covered the song on their [2004] album "Give" .
* has a song entitled "No,I'm Iron Man" on their album ,alltough it has nothing to do with the song.