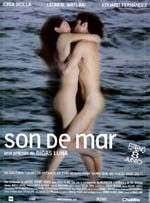 Son de Mar (English: "Sound of the Sea") is a Spanish drama / directed by .

It revolves around Ulises (), who comes to a fishers town to teach at a local high school. During his stay he falls in love with Martina (), the daughter of his landlord. Sierra (), a rich businessman also falls in love with her and fruitlessly tries to win her heart.

Ulises arrives in a coastal town near Valencia to teach literature. He rents a room at a local hostel and immediately falls in love with Martina, the landlord's daughter as he sees her hanging up her clothes on the clothesline. A local businessman by the name of Sierra is also in love with her but she resists his advances. Martina invites Ulises and shows him the "Son de Mar," a yacht on which a film had been made years before while she was still 13 years old. Her dream is to purchased it when she gets rich.

They soon become friends and Ulises recites the for her and she is enthralled by the story of Dido and . The quote she is most infatuated with is::"From the depths of the calm sea, two serpents surface. Above the waves their crista and chest emerge, the rest of their bodies under the surface. One of them holds me and suffocates me with the double ring of her love. And I try to escape from the knot her body makes."

Enchanted by his romantic quotations, amidst the scenery surrounding Valencia, she falls in love with Ulises and gets pregnant. They marry and have a son, . One day Sierra invites both couple to a party at which Ulises feels attracted to a woman in a red dress. The next day he goes out on his boat to catch a tuna fish for Martina. During a storm his boat is found but he has disappeared. Presumed dead they hold a funeral service.

Being alone and having a son, Martina marries Sierra and lives the rich lifestyle she always dreamed of. Five years after he vanished, Ulises calls her and says "it took all his travels to discover that he cannot live without her". Unable to resist, she again falls in love with him. Sierra finds out she is cheating on their marriage and takes drastic measures to punish the lovers. He sabotages the "Son de Mar" which they use to escape. In the middle of the ocean, the ship sinks and the lovers find peace and eternal love in death.