The Cotswold Wildlife Park and Gardens exhibits mammals, birds, reptiles, amphibians and invertebrates from all around the world. The Park is set in 160 acres (0.65 km2) of landscaped parkland and gardens in Oxfordshire, England. Around 350,000 people visited the park in 2005[1].

The gardens and grounds are part of the Bradwell Grove estate. The manor house at Bradwell Grove dates from 1804 and many of the mature trees in the park were planted in the 19th century. In 1970 the owner, John Heyworth, opened the gardens to the public with 230 animals from 40 species exhibited.[2] 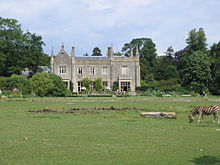 The Walled Garden near the manor house houses a varied collection of animals. Renovations to the exhibits were completed in 2006, and the garden now houses aviaries and an enlarged Tropical House for sloths, ground cuscus, Madagascan jumping rats and tropical birds such as sunbitterns, speckled mousebirds and blue-bellied rollers.

The entrance driveway to the park passes by paddocks where herds of scimitar-horned oryx and llama graze.

In 2008, the Park opened Madagascar, a walk-through exhibit inside the Walled Garden which draws attention to the plight of endangered Madagascan species.[3] The mixed exhibit features ring-tailed lemurs, black lemurs, all of which were previously housed elsewhere in the Park. Collared lemurs, mongoose lemurs, sifaka, Madagascar teal and radiated tortoise are also on show, and were brought in to the collection especially for Madagascar. The health of the collection has is very good with both the ring-tailed Lemurs giving birth to two sets of twins in 2009 and the newly introduced red bellied lemurs also having a baby in the same year.

Larger animals from South America are here, including Brazilian tapir, capybara and white-lipped peccary (Cotswold is the only place in the UK to hold this species). Canadian timber wolves moved into a wooded enclosure in 2006. Other enclosures in the West section house white-naped cranes, emus and parma wallabies.

Domesticated breeds can be found in the Children's Farmyard. 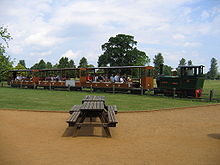 A small train taking visitors around the grounds

A large moated paddock is home to a herd of Chapman's zebra and a group of white rhinoceros. Nearby are Cotswold's big cat enclosures which house Amur leopards, the world's rarest cats, and a pair of Asiatic lions which last bred in 2002.

They now have giraffes in an enclosure beside the zebras and rhinos.

The Reptile House is a converted barn formerly used as stables, and is home to species such as gaboon vipers, bearded dragons, poison dart frogs, Aldabra tortoises and rhinoceros iguanas. The reticulated pythons, which bred in 2007, and anacondas are particularly large specimens. The Park achieved the first UK breeding for Morelet's crocodiles in 2007 with 12 eggs hatching successfully. Cotswold are the only British collection to exhibit this crocodilian which is native to Central America. The Insect House is home to leaf-cutter ants, butterflies, scorpions and tarantulas. A refurbishment of the Reptile House and courtyard area was completed in 2008.

Red panda, banded mongoose, Bactrian camel and a Bat House holding Egyptian fruit bats and long-eared hedgehogs are also located in the South section of the Park. Near the Reptile House are enclosures for white-handed gibbons and siamangs.

Birds in this section include a variety of owls, birds of prey and waterfowl. 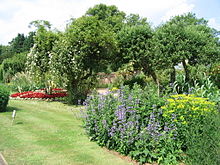 The sheltered Walled Garden was formerly a Victorian kitchen garden supplying vegetables for the manor house, but is now planted with exotic flora such as the giant honeysuckle (Lonicera Hilderbrandtiana) from Burma. In the Tropical House exotic plants are grown as well as crop plants such as papaya, sugar cane and banana.

Other areas around the manor house are planted with herbaceous borders typical of an English garden.

As of October 2006, the Cotswold Wildlife Park holds 40 species which are part of either an ESB (European Studbook) or EEP (European Endangered Species Programme). It is the studbook holder for the red-crested turaco and Mount Omei babbler. In addition, both the crested pigeon and blue-winged kookaburra are monitored species.

All photographs were taken in the park.