Talkeetna is a census-designated place (CDP) in Matanuska-Susitna Borough, Alaska, United States. It is part of the Anchorage, Alaska Metropolitan Statistical Area. At the 2000 census the population was 772.

There were 358 households out of which 28.2% had children under the age of 18 living with them, 38.0% were married couples living together, 7.3% had a female householder with no husband present, and 49.4% were non-families. 38.0% of all households were made up of individuals and 6.7% had someone living alone who was 65 years of age or older. The average household size was 2.16 and the average family size was 2.92. Nagley's Store. The Nagley family are pioneer residents of Talkeetna. They were also partners in the Westward Hotel in Anchorage, a predecessor to today's Hilton Anchorage Hotel. 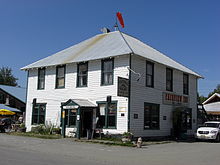 Talkeetna is close to world-class salmon fishing and Denali (also known as Mt. McKinley). Tourists travel to Talkeetna each summer to fish, raft and go flightseeing.[6] Products from local artists, musicians and craftspeople are available in area stores. A 37-year history of The Moose Dropping Festival, a two-day celebration held over two days each July, came to an end for at least a year with the announcement on Aug. 21, 2009 by the Talkeetna Historical Society that the festival has been canceled.[7] The event was named after a lottery where participants bet on numbered, varnished pieces of moose feces, or "moose droppings" dropped from a helicopter onto a target. A softball tournament historically has been held on the same weekend as the Moose Dropping Festival but is not part of the festival itself. Other events that typically have been held on Moose Dropping Festival weekend include a five-kilometre walk-run—also not a part of the official festival, a Mountain Mother contest, and a parade. In December, the Wilderness Woman and Bachelor Auction & Ball takes place.[8]

Talkeetna's largest celebration of the winter, called Winterfest, takes place during the entire month of December, and features a motorized Parade of Lights, a lighted tree in the Village Park, a Taste of Talkeetna, and numerous special events hosted by local businesses and special events at Talkeetna Public Library.

Talkeetna is served by Talkeetna Airport, which is home to several air taxi companies that provide flight seeing trips and support for mountain climbers. Many of the air taxi companies were started to ferry climbers from Talkeetna to Denali, as Talkeetna has the easiest access to the south side of the mountain where the main base camp is located. Legendary bush pilots such as Don Sheldon and Cliff Hudson, both based out of Talkeetna, pioneered glacier flying on Mt. McKinley. Their companies, Talkeetna Air Taxi and Hudson Air Service, respectively, are still in operation.[citation needed]

Talkeetna has a community radio station, 88.9 KTNA, with locally hosted shows and NPR programming. Talkeetna has a local newspaper. the Good Times, which has a distribution of 7,500 year-round and serves the communities of Talkeetna, Trapper Creek, Willow, Houston and Big Lake, with additional distribution along the Parks Highway as far north as Nenana during the summer months. The Good Times is currently published every other week in print.[9] Publishers of the Good Times also publish a local area phone book and an annual visitors guide. Another newspaper, The Alaska Pioneer Press, which was under different ownership and was published monthly, ceased publication in January, 2011, after its owners moved out of the area. Whole Wheat Radio, an independent webcast and wiki, ceased broadcasting late in 2010.

A new Susitna Valley Junior-Senior High School opened in January 2010, replacing the one that burned to the ground in June 2007 while repairs were being made to the roof.[10] In the interim, classes were held in portables on the grounds of the Upper Susitna Senior Center.

The town of Talkeetna is also mentioned in Travel Channel's Man vs Food. In season 2 episode 16, the host travels to the Roadhouse, a restaurant in Talkeetna to sample their one of a kind breakfast dishes. Also featured is West Rib Pub & Cafe.

Although the town of Cicely from the television series Northern Exposure is widely thought to be patterned after Talkeetna,[11][12] filming actually took place in Roslyn, Washington.[13]