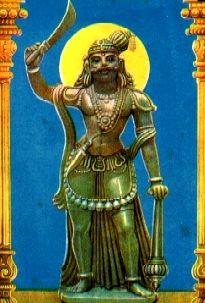 Karuppu Sami also known as Sangili karuppan is one of the regional Tamil male deities who is popular among the social groups of , especially . He is one of the 21 associate folk-deities of and is hence one of the so-called s of the Tamils and the s.

One can find a group of 5 to 6 variants of Karuppasamy among the 21 folk deities who perform the protective roles through Shamanism or Oracle system. 18-Steps Karuppasamy is considered to be most prominent among the Karuppu system.

"Karuppu" (in Tamil) means Black and "Sami" means God. Hence he is associated with darkness, night, etc. It also signifies the fact that s are essentially a black-skinned race and hence his color of skin.

In the ancient Tamil society, people venerated the Veerargal (or warriors) and had the formless stones (Veera Kal or ) or erected in memory of them. These fallen warriors or any persons who sacrificed their life for a good cause such as protection of the welfare of the society or the community are revered by all.

The Karuppanar Kovil (or a ) is always found in the outskirts of the Village. The maintenance of the is taken care of by the whole of the village.

His temple is usually in the open space and will not have traditional s like any other temples. You can see big statues of Gods with weapons like bow and arrow, swords, knives and other protective weapons alongside Him. There will also be statues of other Goddesses ( or the 18 Virgins) in His temples. Animals, often signifying His pets - a dog (Vettai Naai or a hunting dog), a lion and His ride - the white are also found.

The most famous temple for Karuppasamy is located at AzagharKoil, near .Here he is worshipped as Pathinettampadi Karuppu.He is considered as the guardian deity of this temple.

The main form of worship of Karuppanar in the shrine is a formless stone which has been decorated with a and a with flowers and garlands. He wields an "" which is a long form of resembling a , a , sometimes a , a and a smaller .

The Aruval is a very significant weapon in and is considered, in itself, as a symbol of Karuppanar himself. Some s may reach the height of even 5 feet, especially the ones in .

Karuppanar worship is a very ancient ancestral -based worship system. Most officiating priests are non-s and derive from local lineages that had initiated the cult generations ago.

The worship pattern is non - Vedic or non - through Folk tales, Folk songs and Folk arts (, , , etc). The local priest might offer flowers or (holy ash) or Holy flowers to the worshippers and may play the role of an for . Various persons within the clan system are identified to play to the role of oracle on annual turn basis. They undertake vradham and maintain chastity and purity during the period of vradham. During the festivals, oracles get into trance state (Saami aadudhal) and deliver counselling messages to the group assembled there without bias. The normal problems addressed are family problems, financial troubles and local community and social issues for resolving within the community group with the agreement of local ancestral god through oracle.

Whenever the wishes of the people are granted, they give their offerings to Him based on what they ed to offer.

The village committee would decide on when the be conducted. The time of the year when this would fall varies with villages and their local customs - each of which will be associated a folk-lore. Generally, the mass convention assembly of a large number of related family members is organized during the spring season for a period of 2 to 3 days.

The commencement of the festival will be with that of a hoisting of the flag and tying the "." After this time, villagers cannot go out of the village but can come in from a different village.

During this annual gathering, a large number of goats and chicken are sacrificed for Lord Karuppanar. He is also offered s (country - made cigarettes) or s and (toddy = locally instilled alcohol) or some form of modern alcohol.

One interesting fact of special mention is the belief of the village people that the Karuppu samy is being disguised in the form of the who is asked to predict the future. This belief system about Karuppu samy is called the or Saamiyaaduthal in several parts of Tamil Nadu. The social issues will be discussed through these temple fore-tellers (also called as ) whom the people usually consider as the voice of the Karuppa sami deity. When Lord Karuppa sami addresses the people in different villages through the Kodangi, different issues and dimensions on the social, cultural and psychological aspects of the village and the society are reviewed for possible solutions.

Karuppana Swamy worship with a unique sacrifice ritual called "kutti kudithal" is famous in Tamil Nadu among the non brahminical sections. In kutti kudithal festival, the goat or lamb to be sacrificed to Karuppanaswamy will be their sucked blood in the neck, by the trance dancer, while they are still alive in the sacrificial altar. Even to this day, this ritual occurs in some of the Karuppu Swamy temples, for instance, in Sappani Karuppar temple,Vanapatrai street Tiruchirappalli.This year the festival occurred on the midnight of 27th April, 2008. The ondi karuppar of Kuzhumai amman temple, Puthur, Trichy is very famous for kutti kudithal that occurs every year in the tamil month of Masi, when hundreds of goats(lambs) are blood sucked alive by the trance dancer.In Tamil month "AADI" is very famous month for KARUPANNASWAMY. You can feel like anything in front of the GATE.Fully sandal powder in the gate and Full length Flower MALAI and both the side of the Gate you can see big Aruval and Ghadam.In that Big gate u can see one small gate.If you want to drop your NETHIKADAN(COINS) you can open and drop the coins and you can also see 18 steps and there is one ARUAL that is KARUPANNASWAMY(He is the first God for all KARUPANNASWAMY).