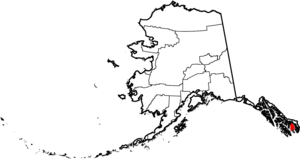 Ketchikan (pronEng|ˈkɛtʃɪkæn) is a city in Ketchikan Gateway Borough, , and the southeasternmost sizable city in that state. With an estimated population of 7,368 in 2007, it is the fifth most populous city in the state.

Ketchikan's economy is based upon tourism and fishing, and the city is known as the " Capital of the World." The is one of the area's major attractions.

Ketchikan is named after Ketchikan Creek, which flows through the town. Ketchikan comes from the name for the creek, "Kitschk-hin", the meaning of which is unclear. It may mean "the river belonging to Kitschk"; other accounts claim it means "Thundering Wings of an Eagle." [ [http://www.britannica.com/eb/article-9045193/Ketchikan Ketchikan in the Encyclopædia Britannica] ]

The ½-mile span called the Tongass Narrows separates Ketchikan from , where is located. In August 2005 the provided for $223m to build the (nicknamed "the Bridge to Nowhere" by its critics) between Ketchikan and Gravina Island. After years of national and international ridicule over the expense of this project, the Alaska government ultimately chose not to build the bridge, and will spend the appropriated funds elsewhere.

There were 3,300 households out of which 52% had children under the age of 18 living with them, 48.6% were married couples living together, 13.0% had a female householder with no husband present, and 38.4% were non-families. 31.7% of all households were made up of individuals and 7.9% had someone living alone who was 65 years of age or older. The average household size was 2.44 and the average family size was 3.09.

In 2007, the population of the city of Ketchikan was reported at 7,685. [ [http://www.borough.ketchikan.ak.us/main/documents/2007Book-ProjectPages.pdf 2007 Community Legislative Priority List] ]

Ketchikan serves as both an air and marine transportation hub for southern Southeast Alaska.

The serves as both a gateway for jet service from Seattle and a bush carrier and charter aircraft hub for destinations like Hyder, , and Prince of Wales Island. Ketchikan also serves as the base for 's regular flights to Klawock.

Ketchikan receives service to two separate ferry lines. Ketchikan sits on the 's route and sees a large number of ships northbound (to the rest of Alaska) and southbound (to &mdash; where a six hour connection can be made to the system &mdash; and ). Ketchikan also sees regular day service from the Alaska Marine Highway vessel M/V "Lituya", a day boat that shuttles between Ketchikan and Metlakatla, its homeport.

see|List of twin towns and sister cities in the United States [http://www.sister-cities.org]

Inside the United States

*Award-winning artist and book illustrator , a Ketchikan resident, is represented by 8 galleries throughout Alaska, and the Midwest. Among other notable achievements, she was the illustrator of -award winning author 's YA novel "Aleutian Sparrow", (Simon and Schuster, 2003). [cite book| last=Hesse| first=Karen| others=Illustrated by Zerbetz, Evon| title=Aleutian Sparrow| year=2003| publisher=| isbn=0689861893]
* Computer programmer and linguist is a resident.
*Bob Weinstein, mayor