In radio, multi-user MIMO (MU-MIMO) is a set of advanced MIMO, multiple-input and multiple-output (pronounced mee-moh or my-moh), technologies that exploit the availability of multiple independent radio terminals in order to enhance the communication capabilities of each individual terminal. To contrast, single-user MIMO only considers access to the multiple antennas that are physically connected to each individual terminal. MU-MIMO can be seen as the extended concept of space-division multiple access (SDMA) which allows a terminal to transmit (or receive) signal to (or from) multiple users in the same band simultaneously. PU2RC is a fundamental and practical MU-MIMO technology for broadcast and multiple access wireless communications.

Like the relationship between OFDM and OFDMA, MU-MIMO (and, similarly, SDMA) can be thought of as an extension of MIMO applied in various ways as a multiple access strategy. A significant difference is that the performance of MU-MIMO relies on precoding capability than OFDMA so that if the transmitter does not use precoding, the performance advantage of MU-MIMO is not achievable.

Multiple access MIMO, MIMO-SDMA, many transmit antenna MIMO-SDMA, Cooperative MIMO, Network MIMO and Ad-hoc MIMO are all family terminologies within MU-MIMO, as each of those technologies leverages multiple users as a degree of freedom in achieving successful radio transmission.

To achieve MIMO from a conventional SISO system, several technologies have been proposed.[1][not in citation given]

Here, based on the literature, we summarize a number of advanced MIMO techniques that leverage multiple users:

Space-Division Multiple Access (SDMA) enables creating parallel spatial pipes next to higher capacity pipes through spatial multiplexing and/or diversity, by which it is able to offer superior performance in radio multiple access communication systems. In traditional mobile cellular network systems, the base station has no information on the position of the mobile units within the cell and radiates the signal in all directions within the cell in order to provide radio coverage. This results in wasting power on transmissions when there are no mobile units to reach, in addition to causing interference for adjacent cells using the same frequency, so called co-channel cells. Likewise, in reception, the antenna receives signals coming from all directions including noise and interference signals. By using smart antenna technology and by leveraging the spatial location of mobile units within the cell, space-division multiple access techniques offer attractive performance enhancements. The radiation pattern of the base station, both in transmission and reception, is adapted to each user to obtain highest gain in the direction of that user. This is often done using phased array techniques.

In GSM cellular networks, the base station is aware of the mobile phone's position by use of a technique called Timing Advance (TA). The Base Transceiver Station (BTS) can determine how distant the Mobile Station (MS) is by interpreting the reported TA. This information, along with other parameters, can then be used to power down the BTS or MS, if a power control feature is implemented in the network. The power control in either BTS or MS is implemented in most modern networks, especially on the MS, as this ensures a better battery life for the MS and thus a better user experience (in that the need to charge the battery becomes less frequent). This is why it may actually be safer to have a BTS close to you as your MS will be powered down as much as possible. For example, there is more power being transmitted from the MS than what you would receive from the BTS even if you are 6 m away from a mast. However, this estimation might not consider all the MS's that a particular BTS is supporting with EM radiation at any given time.

Many Antennas is a smart antenna technique, which overcomes the performance limitation of single user MIMO techniques. In cellular communications, the number of the maximum considered antennas for downlink is 2 and 4 to support LTE and IMT-A requirements, respectively. Since the available spectrum band will probably be limited while the requirement of data rate will continuously increase in beyond IMT-A to support the mobile multimedia services, it is highly probable that the number of transmit antennas at the base station must be increased up to 8 ~ 64 or more. The installation of many antennas at single base stations can have many challenges so it requires to develop several high technologies: new SDMA, new beamforming algorithm and new antenna array. New SDMA: MU-MIMO, Network MIMO (COMP), Remote radio equipments New beamforming: linear beamforming such as MF, ZF and MMSE and nonlinear beamforming such as THP, VP, and DPC New antenna array: direct, remote and wireless antenna array Direct antenna array: linear and 3d phased array, new structure array, and dynamic antenna array Remote and wireless antenna array: distributed antenna array and cooperative beamforming

The first and last Hop: to and from one multi-antenna user and multiple partnered users 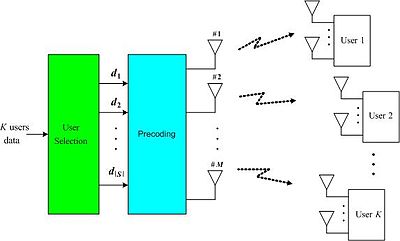 MIMO broadcast represents a MIMO downlink case in a single sender to multiple receiver wireless network. Examples of advanced transmit processing for MIMO BC are interference aware precoding and SDMA-based downlink user scheduling. For advanced transmit processing, the transmitter has to know the channel state information at the transmitter (CSIT). That is, knowledge of CSIT allows throughput improvement, and methods to obtain CSIT become of significant importance. MIMO BC systems have an outstanding advantage over point-to-point MIMO systems, especially when the number of transmit antennas at the transmitter, or AP, is larger than the number of receiver antennas at each receiver (user).

Conversely, MIMO MAC represents a MIMO uplink case in the multiple sender to single receiver wireless network. Examples of advanced receive processing for MIMO MAC are joint interference cancellation and SDMA-based uplink user scheduling. For advanced receive processing, the receiver has to know the channel state information at the receiver (CSIR). Knowing CSIR is generally easier than knowing CSIT. However, to know CSIT costs a lot of uplink resources to transmit dedicated pilots from each user to the AP. MIMO MAC systems outperforms point-to-point MIMO systems especially when the number of receiver antennas at an AP is larger than the number of transmit antennas at each user.

CO-MIMO, also known as Network MIMO (Net-MIMO), or Ad-hoc MIMO, utilizes distributed antennas which belong to other users, while conventional MIMO, i.e., single-user MIMO, only employs antennas belonging to the local terminal. CO-MIMO improves the performance of a wireless network by introducing multiple antenna advantages, such as diversity, multiplexing and beamforming. If the main interest hinges on the diversity gain, it is known as cooperative diversity. It can be described as a form of macro-diversity, used for example in soft handover. Cooperative MISO corresponds to transmitter macro-diversity or simulcasting. A simple form that does not require any advanced signal processing is single frequency networks (SFN), used especially in wireless broadcasing. SFNs combined with channel adaptive or traffic adaptive scheduling is called dynamic single frequency networks (DSFN).

CO-MIMO is a technique useful for future cellular networks which consider wireless mesh networking or wireless ad-hoc networking. In wireless ad-hoc networks, multiple transmit nodes communicate with multiple receive nodes. To optimize the capacity of Ad-hoc channels, MIMO concepts and techniques can be applied to multiple links between the transmit and receive node clusters. Contrasted to multiple antennas in a single-user MIMO transceiver, participating nodes and their antennas are located in a distributed manner. So, to achieve the capacity of this network, techniques to manage distributed radio resources are essential. Strategies such as autonomous interference cognition, node cooperation, and network coding with dirty paper coding (DPC) have been suggested as solutions to optimize wireless network capacity.

Of analogical interest here may be the comparison between the evolution of computing cores and mobile antennas. To wit, a single high performance core is the first generation of CPU core evolution, progressing to a few cores, and then to many cores in a centralized fashion as the second step—the recent environment. It is anticipated that it will be common for cooperative work to proceed from multiple cores owned by different users, made available to the individual user in return for help with others' information processing. Such catchphrases include ambient intelligence, wireless ubiquitous computing, and the semantic web.