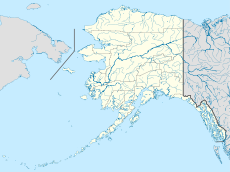 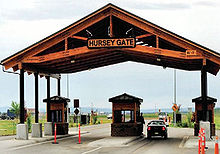 Hursey Gate at Eielson, the primary access point to and from the base. A partial interchange was built on the Richardson Highway in conjunction with the relocation and rebuilding of the gate. 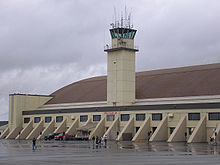 One of two control towers at Eielson Air Force Base. This tower is structurally attached to the aircraft hangar behind. The hangar, the base's largest, is known colloquially as "The Thunderdome". 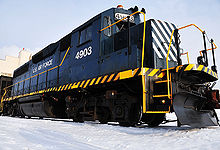 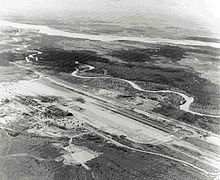 Eielson AFB was established in 1943 as Mile 26 Satellite Field. It is named in honor of polar pilot Carl Ben Eielson. The 354 FW is currently commanded by General James N. Post III.

Until 2007, Eielson was a front line base, deploying fighter and bomber units around the world as well as providing for the defense of Alaska.

Taken off deployment status in 2007 as a result of BRAC 2005, today the primary mission of the base is to support Red Flag-Alaska, a series of Pacific Air Forces commander-directed field training exercises for U.S. Forces, provides joint offensive counter-air, interdiction, close-air support, and large force employment training in a simulated combat environment. These exercises are conducted on the Joint Pacific Alaskan Range complex with air operations flown out of the two bases. Alaska's size enables the military to have the largest air-ground training complex in America.

Eielson is home to the 354th Fighter Wing which is part of the Eleventh Air Force (11 AF) of Pacific Air Forces (PACAF). The 354th Fighter Wing mission is "To train, deliver, maintain and support combat power across the globe while taking care of our people, their families and our infrastructure." To accomplish that mission, the wing implements flying operations, mission support, maintenance and medical care functions and is host to 10 tenant units.

On June 7, 1943, the Western Defense Command ordered construction of a new airfield near present-day Fort Wainwright, then an Army airfield named after Major Arthur Ladd. Because of its hazard-free approaches and relatively flat terrain, surveyor reports indicated a site a little more than twenty five miles southeast of Ladd Army Airfield to be the best in the vicinity for military aviation. The field became known as “Mile 26” because of its proximity to a US Army Signal Corps telegraph station and a Richardson Highway milepost marker using the same designation.

Operational uses of Mile 26 were few. Ladd Field served as the debarkation point for the Alaska-Siberia Ferry Route of the lend-lease program and was the hub of activity. Lend-lease aircraft would occasionally land at Mile 26, but there are no records to indicate any lend-lease aircraft ever used the airfield to take off for Russia. Mile 26 closed when the war ended.

The base reopened in September 1946, once again as a satellite of Ladd Field. The first USAAF operational unit assigned to Eielson was the 57th Fighter Group, equipped successively with P-38 Lightnings, P/F-51 Mustangs, F-80 Shooting Stars, and F-94 Starfire aircraft. The 47th FG was inactivated on 13 April 1953.

A year later, however, Eielson moved from under the shadow of Ladd Field when the Alaskan Air Command assumed organizational control. Also in the fall of 1947, Colonel Jerome B. McCauley assumed duties as commander. The primary missions of Mile 26 were to support Arctic training for USAF tactical and strategic units, as well as defend the base itself.

Headquarters USAF General Order 2, dated January 13, 1948, redesignated Mile 26 as Eielson AFB. It was named for Carl Ben Eielson, an Alaska aviation pioneer who was killed, along with his mechanic Earl Borland, in the crash of their Hamilton aircraft in 1929. Eielson and Borland were attempting a rescue flight to an icebound ship in the Bering Sea when they were killed. On April 1, 1948, the Eielson AFB Wing (Base Complement) was formed. The host-unit subsequently would be dubbed the Eielson AFB Bomb Wing, and finally, in January 1949, the 5010th Wing. Colonel John L. Nedwed, the third commander of the base since it fell under Alaskan Air Command fifteen months before, became the first to head the 5010th.

For the next 34 years, the 5010th (alternately known as the Wing, Composite Wing, Air Base Wing, and lastly, Combat Support Group) served as host-unit at Eielson. Construction boomed at Eielson AFB during the 1950s. Many of the facilities still in use today were built at that time, including Amber Hall, the Thunderdome, Base Exchange, Gymnasium, Theater, some of the schools, and many of the dormitories.

The Air Defense Command deployed interceptors to Eielson during the 1960s. Det. 3, 317th Fighter-Interceptor Squadron from Elmendorf AFB Alaska deployed F-102 Delta Daggers and F-106 Delta Darts to the base between 1960-69.

The 375th Weather Reconnaissance Squadron, from the 308th Bombardment Group at Tinker AFB Oklahoma, arrived at Eielson on 5 March 1949. The 308th flew WB-29 Superfortresses. The unit was redesignated the 58th Strategic Weather Squadron on 21 February 1951 as part of the 303d Bombardment Wing at Davis-Monthan AFB Arizona.

The 58th Weather Squadron remained at Eielson until 8 August 1958.

The 6th SW flew RC–135 strategic reconnaissance missions with an assigned squadron, and, with KC–135s deployed to Eielson from SAC, AFRES, and the ANG, conducted Alaska Tanker Task Force (ATTF) missions to support reconnaissance and numerous exercises for the Air Force and Navy.

A new chapter for the base began October 1, 1981 when the 343d Composite Wing replaced the 5010th as Eielson’s host unit. Flying squadrons assigned to the new wing included the 25th Tactical Air Support Squadron (TASS) and the 18th Fighter Squadron (18 FS). The 25 TASS, at Eielson since 1971, flew O-2 Skymaster and OV-10 Bronco aircraft until its inactivation in 1989; the newly assigned 18 FS operated A-10 Thunderbolt IIs until it converted to F-16 Fighting Falcons in 1991. 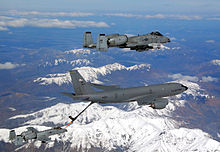 An A-10 Thunderbolt II is refueled mid-air by a KC-135 Stratotanker from the Alaska Air National Guard's 168th Air Refueling Wing.

A C-130 Hercules airplane from the Spanish Air Force parks on the flightline for their stay during Red Flag-Alaska 07-3 at Eielson Air Force Base.
Main article: 354th Fighter Wing

On August 20, 1993, the 354 FW replaced the 343d Wing. No personnel or equipment were affected by the change. Prior to its shutdown, the 343d was the oldest surviving air combat unit in Alaska, with a lineage dating back to the Aleutian Campaign. The 18 FS, whose history also dated back to World War II, remained active, but the 355 FS replaced the 11th TASS.

Within the first year of its arrival the 354 FW hosted an Arctic combat search and rescue exercise between the United States, Canada, and Russia. Ironically, these were the same countries that took part in the search and recovery efforts that followed the fatal crash of Carl Ben Eielson and his mechanic, Earl Borland, in 1930 as they were attempting to fly relief supplies to the Nanuk.

The groundwater contains lead and volatile organic compounds (VOCs) like benzene, xylene, and toluene. Several areas of subsurface petroleum-contaminated soil and floating petroleum product are the sources of continuing groundwater contamination. Ingesting or coming into direct contact with contaminated groundwater or soil may pose a potential health threat. Polychlorinated biphenyl (PCB)-contaminated fish were also found in the area.[4]

There are 1,448 households out of which 77.8% have children under the age of 18 living with them, 92.4% are married couples living together, 2.7% have a female householder with no husband present, and 2.3% are non-families. 2.1% of all households are made up of individuals and 0.0% have someone living alone who is 65 years of age or older. The average household size is 3.52 and the average family size is 3.55.

On 13 May 2005, The Department of Defense proposed a major realignment of the base as part of the Base Realignment and Closure program.