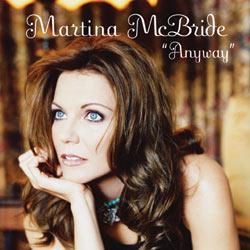 The song marks the first time in Martina's career that she has co-written one of her own singles. [ [http://media.www.qcknightnews.com/media/storage/paper564/news/2007/05/10/KnightLife/Martina.Mcbride.Will.Keep.You.Up.Singing.With.Waking.Up.Laughing-2904179.shtml Martina McBride Will Keep You Up Singing With Waking Up Laughing - Knight Life ] ] It is an inspirational song based on a favorite poem of 's, written by Keith Kent, which he originally titled, "The Paradoxical Commandments". [ [http://www.cmt.com/news/articles/1557827/20070423/mcbride_martina.jhtml CMT.com : News : 20 Questions : 20 Questions with Martina McBride] ] The song generally means, no matter what puts you down in life, do not give up, do it anyway. At the 2007 Country Music Association Awards, "Anyway" was nominated for Single of the Year and Song of the Year awards, but failed to win either.

"Anyway" was first released at the on , 2006, where McBride performed the song to promote it. However, the single was released to the , 2007.

in covered this song with a performance on "American Idol"