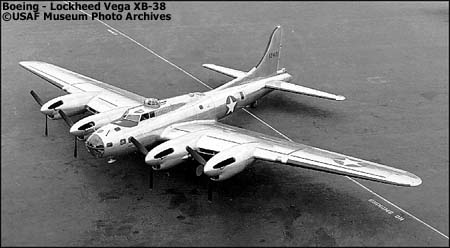 The XB-38 Flying Fortress was a prototype aircraft of .

It was the result of a modification project undertaken by and Vega (a subsidiary of Lockheed) on a to fit it with liquid-cooled -89 s. It was meant as an improved version of the B-17, and a variant that could be used if air-cooled s became scarce. Completing the modifications took less than a year, and the XB-38 made its first flight on 1943. Only one was built, and it was developed from an existing B-17 bomber.

While the XB-38 delivered a slightly higher top speed, after a few flights it had to be grounded due to a problem with engine manifold joints leaking exhaust gases. Following the fixing of this problem, testing continued until the ninth flight on 1943. During this flight, the third (right inboard) engine caught fire, and the crew was forced to bail out. The XB-38 was destroyed and the project was canceled, in part because the V-1710 engines were needed for other projects such as the , , , A Mustang and .