The Myyrmanni bombing took place on October 11, 2002, in Myyrmäki, Vantaa, Finland, in Greater Helsinki, at the Myyrmanni shopping mall. The bomb killed seven, including two teenagers, a 7-year-old child and the presumed bomber. 166 people were injured, including 10 children. 66 victims required hospitalization with the remainder treated and released at the scene.[1] The shopping center was especially crowded, with almost 2,000 people, including many children who had come to see a clown performance.

The presumed perpetrator was Petri Erkki Tapio Gerdt (April 17, 1983 - October 11, 2002), who was killed in the explosion. He was a 19-year-old chemical engineering student at EVTEK (Espoo-Vantaa Institute of Technology) and a hobbyist bomb-maker. He was also an active member of Kotikemia ("Home chemistry"), an on-line forum for amateur chemists.

The explosive device was likely constructed in his apartment. It weighed about 2-3 kilograms and was made of ammonium nitrate and nitromethane with shotgun pellets.[1] The motive for the bombing is unclear, but it is suspected that the bomb exploded prematurely. According to the police, the use of pellets to increase lethality hints that Gerdt's intention might have been to leave the bomb in the mall and detonate it remotely after leaving. Petri's father, Armas Gerdt, noted that Gerdt used to detonate his home-made explosives in the woods nearby and suspects that he was transporting the bomb to be set off elsewhere.[2] The possibility of Gerdt having links to any radical groups or terrorist organizations has been ruled out.[citation needed] 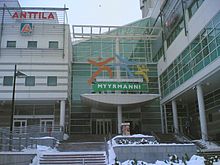 Armas Gerdt has written the book Petrin matka Myyrmanniin ("Petri's Path to Myyrmanni") about the incident. The moderator of Kotikemia was acquitted of responsibility in court. The bombing was especially shocking for Finland and the other Nordic countries, where bombings are extremely rare.[citation needed] The shopping centre was closed for nearly three weeks before re-opening later in October.[3] Flags were ordered flown at half staff throughout Finland.