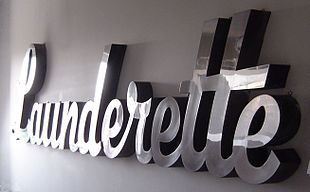 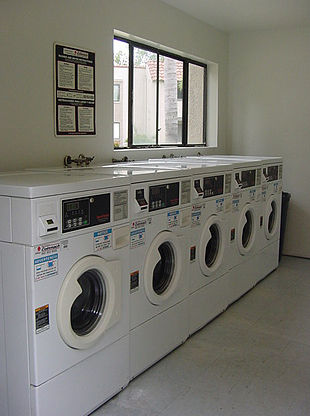 Part of the interior of a self-service laundry 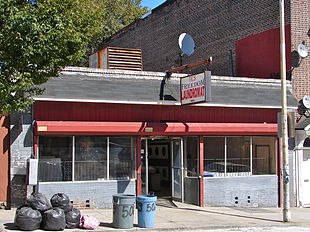 Laundromat in Philadelphia that opened in 1947 and is believed to be the first coin-operated laundromat in the United States.

A self-service laundry is a facility where clothes are washed and dried. They are known in the United Kingdom as launderettes or laundrettes, and in the United States, Canada, and Australia as laundromats (from the genericized trademark of the Westinghouse Electric Corporation)[1] or washaterias. George Edward Pendray created the word "laundromat" for Westinghouse.[1]

Some laundries employ staff to provide service for the customers. Minimal service centres may simply provide an attendant behind a counter to provide change, sell washing powder, and watch unattended machines for potential theft of clothing. Others allow customers to drop off clothing to be washed, dried, and folded. This is often referred to as Fluff & Fold, Wash-n-Fold, bachelor bundles, a service wash or full-service wash. Some staffed laundry facilities also provide dry cleaning pick-up and drop-off. There are over 35,000 laundries throughout the United States.[2] Similar services exist in the United Kingdom where the terms service wash or full-service wash are also in use.

The evolution of self-serve laundry services have been seen in some "fluff n fold" services provided by various laundromats. These services provide the end user with wash, dry, and folding services on a per pound basis. Some services offer free pickup and delivery as well as complimentary laundry bags as part of their customer appreciation. Additionally, dry-cleaning services have been known to utilize the pickup and delivery as a means to help generate additional revenue.

The first washateria was opened in 1936 in Fort Worth, Texas by Noah Brannen. Most washaterias in the United States are fully automated and coin operated and generally unmanned, operating 24 hours a day.[3]

The first UK launderette was opened on 9 May 1949 in Queensway (London).[4] UK launderettes are mainly fully automated, coin operated and are either manned or unmanned. Some may be manned during fewer hours than the operating time each week.[citation needed] They are generally found only in urban and suburban areas and have been common features of urban life since the 1960s. In the last two decades there has been a decline in the number of launderettes, to approximately 3000 nationally.

Rapidly rising utility charges, premises rent and a lower purchase cost of domestic machines have been noted as principal reasons for the recent decline. High initial launch costs, specifically for commercial washing machines and dryers, have also been commented on as reasons for fewer new entrants into the market. Furthermore, machine updates can be prohibitively expensive, which has held back premises investment.

However, most UK households have bedding (such as duvets and comforters) which are far above the capacity of domestic machines, making launderettes the only means available for cleaning them.

Many of the manned operations in the UK have added value services such as ironing, dry cleaning and service washes, which prove popular to busy professionals, students, and senior citizens. Student accommodation blocks often have their own unmanned laundries, which are typically commercially run at a profit by the accommodation provider.

Local directories such as the Yellow Pages and Thomson only show those laundries that have chosen to pay for an entry in their directories, so trends are difficult to assess. However, cities such as London, Birmingham, Manchester, and Leeds have significant numbers of launderettes, as do many coastal tourist areas.

The main manufacturers serving the UK in this market are Ipso Electrolux, Primus, and Maytag. Brands such as Speed Queen and Frigidaire are also regularly deployed, with most originating from Belgium and the USA.

Whilst the future of launderettes in the UK is not assured, domestic machine users experiencing breakdowns in the home, users of large bedding, and tourists are all potential customers, thereby making the provision valuable to the community.