Optimal design
This article is about the topic in the design of experiments. For the topic in optimal control theory, see shape optimization. 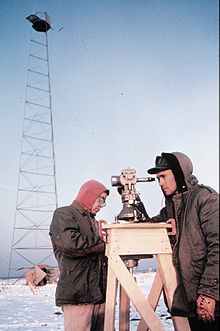 Gustav Elfving developed the optimal design of experiments, and so minimized surveyors' need for theodolite measurements (pictured), while trapped in his tent in storm-ridden Greenland.[1]

Optimal designs are a class of experimental designs that are optimal with respect to some statistical criterion.

The optimality of a design depends on the statistical model and is assessed with respect to a statistical criterion, which is related to the variance-matrix of the estimator. Specifying an appropriate model and specifying a suitable criterion function both require understanding of statistical theory and practical knowledge with designing experiments.

Minimizing the variance of estimators

It is known that the least squares estimator minimizes the variance of mean-unbiased estimators (under the conditions of the Gauss–Markov theorem). In the estimation theory for statistical models with one real parameter, the reciprocal of the variance of an ("efficient") estimator is called the "Fisher information" for that estimator.[6] Because of this reciprocity, minimizing the variance corresponds to maximizing the information.

Other optimality-criteria are concerned with the variance of predictions:

Catalogs of optimal designs occur in books and in software libraries.

In addition, major statistical systems like SAS and R have procedures for optimizing a design according to a user's specification. The experimenter must specify a model for the design and an optimality-criterion before the method can compute an optimal design.[10]

Choosing an optimality criterion and robustness

since the [traditional optimality] criteria . . . are variance-minimizing criteria, . . . a design that is optimal for a given model using one of the . . . criteria is usually near-optimal for the same model with respect to the other criteria.[13]

High-quality statistical software provide a combination of libraries of optimal designs or iterative methods for constructing approximately optimal designs, depending on the model specified and the optimality criterion. Users may use a standard optimality-criterion or may program a custom-made criterion.

All of the traditional optimality-criteria are convex (or concave) functions, and therefore optimal-designs are amenable to the mathematical theory of convex analysis and their computation can use specialized methods of convex minimization.[15] The practitioner need not select exactly one traditional, optimality-criterion, but can specify a custom criterion. In particular, the practitioner can specify a convex criterion using the maxima of convex optimality-criteria and nonnegative combinations of optimality criteria (since these operations preserve convex functions). For convex optimality criteria, the Kiefer-Wolfowitz equivalence theorem allows the practitioner to verify that a given design is globally optimal.[16] The Kiefer-Wolfowitz equivalence theorem is related with the Legendre-Fenchel conjugacy for convex functions.[17]

If an optimality-criterion lacks convexity, then finding a global optimum and verifying its optimality often are difficult.

When scientists wish to test several theories, then a statistician can design an experiment that allows optimal tests between specified models. Such "discrimination experiments" are especially important in the biostatistics supporting pharmacokinetics and pharmacodynamics, following the work of Cox and Atkinson.[18]

When practitioners need to consider multiple models, they can specify a probability-measure on the models and then select any design maximizing the expected value of such an experiment. Such probability-based optimal-designs are called optimal Bayesian designs. Such Bayesian designs are used especially for generalized linear models (where the response follows an exponential-family distribution).[19]

The use of a Bayesian design does not force statisticians to use Bayesian methods to analyze the data, however. Indeed, the "Bayesian" label for probability-based experimental-designs is disliked by some researchers.[20] Alternative terminology for "Bayesian" optimality includes "on-average" optimality or "population" optimality.

Scientific experimentation is an iterative process, and statisticians have developed several approaches to the optimal design of sequential experiments.

Sequential analysis was pioneered by Abraham Wald.[21] In 1972, Herman Chernoff wrote an overview of optimal sequential designs,[22] while adaptive designs were surveyed later by S. Zacks.[23] Of course, much work on the optimal design of experiments is related to the theory of optimal decisions, especially the statistical decision theory of Abraham Wald.[24]

The earliest optimal designs were developed to estimate the parameters of regression models with continuous variables, for example, by J. D. Gergonne in 1815 (Stigler). In English, two early contributions were made by Charles S. Peirce and Kirstine Smith.

The optimization of sequential experimentation is studied also in stochastic programming and in systems and control. Popular methods include stochastic approximation and other methods of stochastic optimization. Much of this research has been associated with the subdiscipline of system identification.[27] In computational optimal control, D. Judin & A. Nemirovskii and Boris Polyak has described methods that are more efficient than the (Armijo-style) step-size rules introduced by G. E. P. Box in response-surface methodology[28]

Specifying the number of experimental runs

Using a computer to find a good design

In the mathematical theory on optimal experiments, an optimal design can be a probability measure that is supported on an infinite set of observation-locations. Such optimal probability-measure designs solve a mathematical problem that neglected to specify the cost of observations and experimental runs. Nonetheless, such optimal probability-measure designs can be discretized to furnish approximately optimal designs.[29]

In some cases, a finite set of observation-locations suffices to support an optimal design. Such a result was proved by Kôno and Kiefer in their works on response-surface designs for quadratic models. The Kôno-Kiefer analysis explains why optimal designs for response-surfaces can have discrete supports, which are very similar as do the less efficient designs that have been traditional in response surface methodology.[30]

The prophet of scientific experimentation, Francis Bacon, foresaw that experimental designs should be improved. Researchers who improved experiments were praised in Bacon's utopian novel New Atlantis:

Then after divers meetings and consults of our whole number, to consider of the former labors and collections, we have three that take care out of them to direct new experiments, of a higher light, more penetrating into nature than the former. These we call lamps.

In 1815, an article on optimal designs for polynomial regression was published by Joseph Diaz Gergonne, according to Stigler.

Charles S. Peirce proposed an economic theory of scientific experimentation in 1876, which sought to maximize the precision of the estimates. Peirce's optimal allocation immediately improved the accuracy of gravitational experiments and was used for decades by Peirce and his colleagues. In his 1882 published lecture at Johns Hopkins University, Peirce introduced experimental design with these words:

Logic will not undertake to inform you what kind of experiments you ought to make in order best to determine the acceleration of gravity, or the value of the Ohm; but it will tell you how to proceed to form a plan of experimentation.

[....] Unfortunately practice generally precedes theory, and it is the usual fate of mankind to get things done in some boggling way first, and find out afterward how they could have been done much more easily and perfectly.[31]

Like Bacon, Peirce was aware that experimental methods should strive for substantial improvement (even optimality).

Kirstine Smith proposed optimal designs for polynomial models in 1918. (Kirstine Smith had been a student of the Danish statistician Thorvald N. Thiele and was working with Karl Pearson in London.)

Textbooks for practitioners and students

The textbook by Atkinson, Donev and Tobias has been used for short courses for industrial practitioners as well as university courses.

Optimal block designs are discussed by Bailey and by Bapat. The first chapter of Bapat's book reviews the linear algebra used by Bailey (or the advanced books below). Bailey's exercises and discussion of randomization both emphasize statistical concepts (rather than algebraic computations).

Optimal block designs are discussed in the advanced monograph by Shah and Sinha and in the survey-articles by Cheng and by Majumdar, which are cited below.

Books for professional statisticians and researchers