An anti-aliasing filter is a filter used before a signal sampler, to restrict the bandwidth of a signal to approximately satisfy the sampling theorem. Since the theorem states that unambiguous interpretation of the signal from its samples is possible when the power of frequencies above the Nyquist frequency is zero, a real anti-aliasing filter can generally not completely satisfy the theorem. A realizable anti-aliasing filter will typically permit some aliasing to occur; the amount of aliasing that does occur depends on how good the filter is and what the frequency content of the input signal is.

Anti-aliasing filters are commonly used at the input of digital signal processing systems, for example in sound digitization systems; similar filters are used as reconstruction filters at the output of such systems, for example in music players. In the later case, the filter is to prevent aliasing in the conversion of samples back to a continuous signal, where again perfect stop-band rejection would be required to guarantee zero aliasing.

The theoretical impossibility of realizing perfect filters is not much an impediment in practice, though practical considerations do lead to system design choices such as oversampling to make it easier to realize "good enough" anti-aliasing filters. 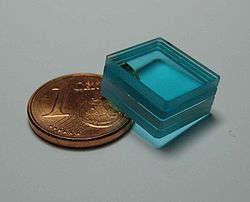 In the case of optical image sampling, as by image sensors in digital cameras, the anti-aliasing filter is also known as an optical lowpass filter or blur filter or AA filter. The mathematics of sampling in two spatial dimensions is similar to the mathematics of time-domain sampling, but the filter implementation technologies are different. The typical implementation in digital cameras is two layers of birefringent material such as lithium niobate, which spreads each optical point into a cluster of four points.[1]

The choice of spot separation for such a filter involves a tradeoff among sharpness, aliasing, and fill factor. In a monochrome or three-CCD or Foveon X3 camera, the fill factor alone, if near 100% effective with microlenses, can provide a significant anti-aliasing effect,[2] while in color filter array (CFA, e.g. Bayer filter) cameras, an additional filter is generally needed to reduce aliasing to an acceptable level.[3][4][5]

A technique known as oversampling is commonly used in audio conversion, especially audio output. The idea is to use a higher intermediate digital sample rate, so that a nearly-ideal digital filter can sharply cut off aliasing near the original low Nyquist frequency, while a much simpler analog filter can stop frequencies above the new higher Nyquist frequency.

Often, an anti-aliasing filter is a low-pass filter; however, this is not a requirement. Generalizations of the Nyquist–Shannon sampling theorem allow sampling of other band-limited passband signals instead of baseband signals – see undersampling.

For signals that are bandwidth limited, but not centered at zero, a band-pass filter can be used as an anti-aliasing filter. For example, this could be done with a single-sideband modulated or frequency modulated signal. If one desired to sample an FM radio broadcast centered at 87.9 MHz and bandlimited to a 200 kHz band, then an appropriate anti-alias filter would be centered on 87.9 MHz with 200 kHz bandwidth (or pass-band of 87.8 MHz to 88.0 MHz), and the sampling rate would be no less than 400 kHz, but should also satisfy other constraints to prevent aliasing.

It is very important to avoid input signal overload when using an anti-aliasing filter. If the signal is strong enough, it can cause clipping at the analog-to-digital converter, even after filtering. When distortion due to clipping occurs after the anti-aliasing filter, it can create components outside the passband of the anti-aliasing filter; these components can then alias, causing the reproduction of other non-harmonically-related frequencies. In digital audio, the resulting aliased distorted signal of "digital clipping" has a characteristic sound that can be easily recognized.