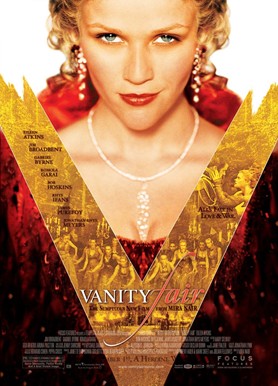 
's novel "" ( - ) has been the subject of numerous television and film adaptations. "Vanity Fair" is a 2004 drama/romance , directed by . This version made substantial changes, including a happy ending (see Thackeray article for plot summary). It stars as .

The film was nominated for "Golden Lion" Award in .

Critics gave the film mixed reviews. reported the film had an average score of 53 out of 100, based on 41 reviews. [cite web|url=http://www.metacritic.com/film/titles/vanityfair?q=vanity%20fair|title=Vanity Fair (2004 film): Reviews |accessdate=2008-02-21 |publisher=]

of the "" gave positive review, calling the movie "Mira Nair's fine movie version of the 1848 book, in all its glory and scope and wit." [ [http://www.washingtonpost.com/wp-dyn/articles/A51157-2004Aug31.html 'Vanity Fair': The Empire, Richly Painted (washingtonpost.com) ] ] In the "", Lawrence Toppman commented that "The filmmakers have wisely retained the main structure of the book" and that "The cast is uniformly good, even when dealing with sudden mood changes forced by the screenwriters' need to move forward." [ [http://ae.charlotte.com/entertainment/ui/charlotte/movie.html?id=164734&reviewId=15989&startDate=NEXT7 Movie: Vanity Fair ] ] Meanwhile, Lisa Schwarzbaum, in her review in "", rated the film a B-, and added that the film "borders on perky &mdash; a duller, safer tonal choice for the story of a conniving go-getter whose fall is as precipitous as her rise." [ [http://www.ew.com/ew/article/0,,690949,00.html Vanity Fair | Movie Review | Entertainment Weekly ] ]