The Pico Duarte was allegedly climbed for the first time in 1851 by the British consul to the country, Sir Robert Hermann Schomburgk. He named the mountain Monte Tina and estimated its height at 3,140 m. In 1912, Father Miguel Fuertes dismissed Schomburgk's calculations after climbing La Rucilla and considering that it was the tallest summit of the island. A year later, the Swedish botanist Erik Leonard Ekman sided with the Englishman's estimate, thinking it was closer to the truth, and called the sister summits as Pelona Grande and Pelona Chica ("Big Pelona" and "Small Pelona", respectively). During the Rafael Leonidas Trujillo Molina regime, the taller of the two was called Pico Trujillo, only to be renamed later, after the dictator's death, with its current name of Pico Duarte, in honor of Juan Pablo Duarte, one of the Dominican Republic's founding fathers. An east-facing bronze bust of Duarte atop a stone pedestal sits today at the very summit, next to a flagpole that bears the Dominican banner and a cross. 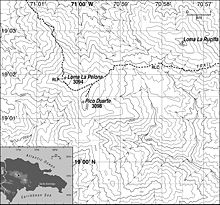 The mountain's elevation continued to be debatable for decades, up until the mid-1990s, when it was still held to be 3,175 meters high. In 2003 it was measured by a researcher using GPS technology and it was found to be 3,098 meters.[2] The official elevation as recorded by Dominican government agencies is 3,087 meters (as can be seen written on the sign in the photo), a measurement that has been confirmed by several groups of hikers using personal GPS consoles (the most recent verified one in January 2005). Despite this, SRTM data indicates that the professional survey is probably more accurate. It's only a few meters taller than La Pelona, its twin sister which stands at 3,094, and from which it is separated by a col between summits that's approximately 1.5 km wide, and is officially named Valle del Baíto, but unofficially called Valle de Lilís. The col's mean elevation is of 2,950 meters.

The area has a climate that very few would associate as typical of a Caribbean island, with cool temperatures all year round, going several degrees below freezing during winter nights.

The mountain and the surrounding landscape are covered in pino de cuaba (Pinus occidentalis) forests. The pines frequently host the epiphytes guajaca (Tillandsia spp.) and the parasitic Dendropemon pycnophyllus. Some areas, like the Valle de Lilís, are tree-less meadows of tussock-like pajones (Danthonia domingensis). The understory is composed of shrub such as Lyonia heptamera, Myrica picardae, Myrsine coriacea, Ilex tuerkheimii, Garrya fadyenii and Baccharis myrsinites. The composition of the vegetation is due to very acidic soil.[1]

A wildfire in 2003 altered the landscape of a large section of the eastern side of the mountain. However, as of 2008, what was once a hillside of charred trees is now a magnificent new-growth forest. While thousands of charred trees are still standing, a large variety of indigenous grasses and small plants are now growing, creating an even more varied experience to this already diverse ecology.

There is a well-maintained system of trails leading up to the summit, with trailheads at several locations (see topo map for their final stretches to the summit). The easiest access is from the town of La Ciénega, near Jarabacoa. The trail is 23.1 km (14.4 mi) to the summit, with a total elevation change of 1,977 meters, and a shelter 5 km away from the summit. Tourist-friendly travel agencies in the town of Jarabacoa can help arrange trips from this trailhead, using mules in their employ to help lug food, sleeping bags and supplies for the overnight stay in the shelter. A few fresh water springs labeled "Potable" are along the trail, but water filters or purifying tablets are recommended. The vast majority of hikers travel by this route.

For the more adventurous, there is another trailhead northwest of the town of San Juan de la Maguana. These four-day (three night) trips that end at the Ciénaga trailhead (or, for an extra day of hiking, back at the starting location) are run entirely by local Dominicans who cook the food you provide and help you camp along the way. Each night is spent in well maintained shelters, and due to the distance traveled, riding by mule-back is strongly encouraged. Far off the beaten path, it is highly unlikely that there will be anyone else on the trail until you merge with the trail from La Ciénaga. Although a Peace Corps volunteer has been helping to organize the trips, a strong command of Spanish is recommended for anyone that attempts this route.

According to Dominican Park Service representatives in La Cienaga, while approximately 1,000 hikers visit Pico Duarte during each of the months of December and January, only about 10 to 15 people a day hike the mountain during off-season months.[unreliable source?]