/ˈæloʊ/, also Aloë, is a genus containing about 500 species of flowering succulent plants. The most common and well known of these is Aloe vera, or "true aloe".

The genus is native to Africa, and is common in South Africa's Cape Province, the mountains of tropical Africa, and neighboring areas such as Madagascar, the Arabian peninsula, and the islands of Africa.

The APG III system (2009) places the genus in the family Xanthorrhoeaceae, subfamily Asphodeloideae.[1] In the past it has also been assigned to families Aloaceae and Liliaceae or lily family. Members of the closely allied genera Gasteria, Haworthia and Kniphofia, which have a similar mode of growth, are also popularly known as aloes. The plant Agave americana, which is sometimes called "American aloe", belongs to Asparagaceae, a different family.

Most Aloe species have a rosette of large, thick, fleshy leaves. The leaves are often lance-shaped with a sharp apex and a spiny margin. Aloe flowers are tubular, frequently yellow, orange, pink or red, and are borne, densely clustered and pendant, at the apex of simple or branched, leafless stems.

Many species of Aloe appear to be stemless, with the rosette growing directly at ground level; other varieties may have a branched or unbranched stem from which the fleshy leaves spring. They vary in color from grey to bright-green and are sometimes striped or mottled. Some Aloes native to South Africa are arborescent.[2]

Aloe species are frequently cultivated as ornamental plants both in gardens and in pots. Many Aloe species are highly decorative and are valued by collectors of succulents. Aloe vera is used both internally and externally on humans, and is claimed to have some medicinal effects, which have been supported by scientific and medical research. The gel in the leaves can be made into a smooth type of cream that can heal burns such as sunburn. They can also be made into types of special soaps.

Historical use of various Aloe species by humans is well documented. Documentation of the clinical effectiveness is available, although relatively limited.[3]

Of the 500+ species of Aloe, only a few were used traditionally as a herbal medicine, aloe vera again being the most commonly used version of aloe in herbal medicine. Also included are Aloe perryi (found in northeastern Africa) and Aloe ferox (found in South Africa). The Greeks and Romans used aloe vera to treat wounds. In the Middle Ages, the yellowish liquid found inside the leaves was favored as a purgative.[citation needed] Unprocessed aloe that contains aloin is generally used as a laxative, whereas processed aloe vera juice does not usually contain significant aloin.

Some species, particularly Aloe vera are used in alternative medicine and in the home first aids. Both the translucent inner pulp and the resinous yellow aloin from wounding the Aloe plant are used externally to relieve skin discomforts. As an herbal medicine, aloe vera juice is commonly used internally to relieve digestive discomfort.[4][5][6] Some modern research suggests Aloe vera can significantly slow wound healing compared to normal protocols of treatment.[7] Other reviews of randomised and controlled clinical trials have provided no evidence that Aloe vera has a strong medicinal effect.[8][9]

Today, aloe vera is used both internally and externally on humans. The gel found in the leaves is used for soothing minor burns, wounds, and various skin conditions like eczema and ringworm. The extracted aloe vera juice aloe vera plant is used internally to treat a variety of digestive conditions. The use of this herbal medicine was popularized in the 1950s in many Western countries. The gel's effect is nearly immediate; it also applies a layer over wounds that is said to reduce the chance of any infection. Despite its popularity, aloe is an allergen and should always be tested before use.

There have been relatively few studies about possible benefits of Aloe gel taken internally. Components of Aloe may inhibit tumor growth.[10] There have been some studies in animal models which indicate that extracts of Aloe have a significant anti-hyperglycemic effect, and may be useful in treating Type II diabetes. These studies have not been confirmed in humans.[11] 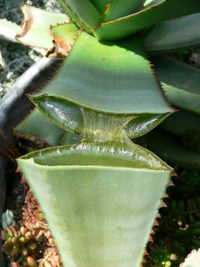 Succulent plants, such as this Aloe, store water in their enlarged fleshy leaves, stems, or roots, as shown in this split aloe leaf. This allows them to survive in arid environments.

On May 9, 2002, the U.S. Food and Drug Administration issued a final rule banning the use of aloin, the yellow sap of the aloe plant for use as a laxative ingredient in over-the-counter drug products.[12] Most aloe juices today do not contain significant aloin.

According to W. A. Shenstone, two classes of aloins are to be recognized: (1) nataloins, which yield picric and oxalic acids with nitric acid, and do not give a red coloration with nitric acid; and (2) barbaloins, which yield aloetic acid (C7H2N3O5), chrysammic acid (C7H2N2O6), picric and oxalic acids with nitric acid, being reddened by the acid. This second group may be divided into a-barbaloins, obtained from Barbados Aloe, and reddened in the cold, and b-barbaloins, obtained from Socotrine and Zanzibar Aloe, reddened by ordinary nitric acid only when warmed or by fuming acid in the cold. Nataloin (2C17H13O7·H2O) forms bright yellow scales. Barbaloin (C17H18O7) prismatic crystals. Aloe species also contain a trace of volatile oil, to which its odour is due.[citation needed] 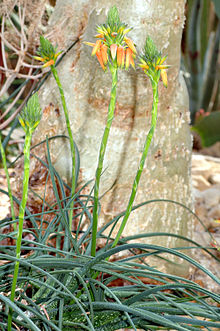 Aloe rubrolutea occurs as a charge in heraldry, such as in the Civic Heraldry of Namibia.[13]

There are around 400 species in the genus Aloe. For a full list, see List of species of genus Aloe. Species include: 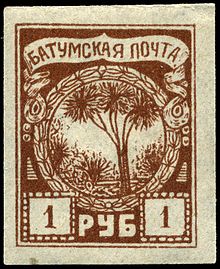 An Aloe tree appeared on stamps issued in 1919 by Batum, a semi-autonomous region of Georgia in the South Caucasus region.