Order of the Golden Kite

Order of the Golden Kite

The Order of the Golden Kite (金鵄勲章, Kinshi Kunsho?) was an order of the Empire of Japan, established on 12 February 1890 by Emperor Meiji "in commemoration of Jimmu Tennō, the Romulus of Japan."[1]

The Order of the Golden Kite was an exclusively military award, conferred for bravery, leadership or command in battle.

Since the monthly pay for a private in the Imperial Japanese Army at the time was 8 Yen, 80 sen, this amounted to a very substantial reward. The monetary stipend was abolished in 1940.

The honor was sometimes awarded individually, sometimes awarded en masse. In mid-October 1942, posthumous awards were announced following ceremonies at the Yasukuni Shrine. Posthumous honorees included 995 who were lost in combat in the far-flung Pacific War battles and 3,031 were lost fighting in China. In this instance, Tokyo's official radio broadcast of the list of posthumous recipients of the Order of the Golden Kite was monitored by Allied forces in Asia.[3] The number of honorees was not considered remarkable at the time, but the number of posthumous awards was considered noteworthy by Allied analysts.[4] Specific high ranking naval and army officers were named; and in addition, special mention was given to 55 naval aviators and 9 "members of a special attack flotilla" -- presumably miniature submarines taking part in the attack on Pearl Harbor.[3]

The order of the Golden Kite was officially abolished by the Supreme Commander of the Allied Powers of Occupied Japan in 1947. 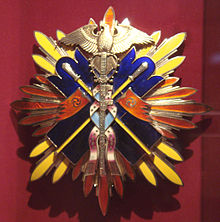 Order of the Golden Kite, 1st and 2nd class plaque.

The badge depicts a golden kite, a messenger of the kami as described in the ancient Japanese chronicle Nihon Shoki, which helped Emperor Jimmu defeat his enemies in battle. The golden kite stands on an eight-pointed star with 32 rays enameled in red. Below the kite are two crossed ancient samurai shields, enameled blue, with two crossed swords enameled yellow, with silver hilts. On one side is a halberd (enameled green with white trappings), with the mitsu tomoe Shinto symbol on red banners. The reverse side is plain.

The badge was gilt for the 1st-5th classes and silver for the 5th-7th classes. It was suspended on a ribbon in blue-green with a white stripe near the edges, worn as a sash on the right shoulder by the 1st class, as a necklet by the 2nd and 3rd classes, on the left chest by the 4th and 5th classes. The badges for 6th and 7th classes were non-enameled.

The star of the 1st and 2nd classes was similar to the badge as described above, but with both red and yellow enameled rays. It was worn on the left chest by the 1st class, on the right chest by the 2nd class.