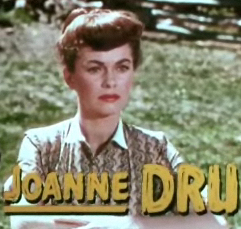 Joanne Dru (, – , ) was an American and actress. She also was the elder sister of Peter Marshall, best known for hosting "".

Born Joanne Letitia LaCock in , Dru came to in 1940 at the age of eighteen. After finding employment as a model, she was chosen by to appear in the cast of his Broadway show "". Dru met and married popular singer . When they moved to , she found work in the . Dru was spotted by a talent scout and made her first film appearance in "" (1946).

Over the next decade, Dru appeared frequently in films and on television. She was cast often in western films such as 's "Red River" (1948), and 's "" (1949) and "" (1950). She later lamented that she had been typecast in western films, commenting that once an actress suffered that fate, that was the end, adding that she never liked horses.

She gave a well-received performance in the dramatic film "All the King's Men" (1949), and co-starred with in "" (1952) about major-league baseball pitcher Jerome "Dizzy" Dean. She was divorced from Haymes in 1949, and married John Ireland, who was also in "Red River", less than a month later. Dru and Ireland got divorced in 1957.

She also appeared in the film "" (1954). Her film career began to fade by the end of the 1950s, but she continued working frequently in television, and played the female lead of Babs Wooten in the 1960-1961 ABC sitcom "". Her costars were Mark Miller as her husband, Bill Wooten, and as the Native American Hawkeye. After "Guestward, Ho!", she appeared sporadically for the rest of the 1960s and the first half of the 1970s, with one feature film appearance, in "Sylvia" (1965), and eight television appearances. Although regarded as a capable and popular film actress, it was for her contributions to television that Dru was awarded a star on the .

Dru had five children, three with Haymes, and two with Ireland. She died in at the age of 74 from .